Winnipeg Free Press:  Hometown boy eager to make good.  He has a pretty consistent all around game and with his time with the Wings, he would bring Stanley Cup experience to this young Jets roster.

Winnipeg Free Press:  Scheifele relies on smarts, agility to foil big boys.  We shouldn’t forget that the Jets 1st round pick isn’t exactly a small guy at 6 ft 3 in.

Globe and Mail:  No crystal ball for Winnipeg Jets.  Should be a roller coaster of emotions this season as Jets fans watch the team compete each night, but even if they fare poorly, for the next year (or five) at the end of the day at least we have a team, even if they merit some boo’ing.

Winnipeg Sun:  Jets’ Slater a ‘beast’.  The Jets are doing a ton of promo’s right now.

Winnipeg Sun:  Do-or-die for bubble players.  Our own Michael Remis gave a very good assessment as to which players you might expect to see on the October 9th roster.

Winnipeg Free Press:  Jets fans should see improved cell phone service.  Considering the name on the arena that’s probably a good thing although in their defene, the systems were probably overloaded with 15,000+ Jets fans trying to send pictures/tweets from the 1st exhibition game.

CBC:  Jet fuel documentary celebrating Winnipeg fans is taking off.  We had an interesting interview with the cousins from Calgary (originally from Winnipeg) a few weeks back and look forward to seeing what the end product will look like.

The Barrie Examiner:  Coach has been in Scheifele’s shoes.  Will the Jets 2.0 send him back or will they follow the path blazed by the Jets 1.0 by sending their #1 pick back to Barrie? 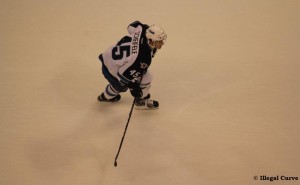 Winnipeg Sun:  Jets take longer look at Scheifele.  Interesting that the Jets coach sounds like he might (provided Scheifele signs) 9 games in which to prove he belongs in the NHL.  As IC’s Richard Pollock pointed out in his ‘Scheifele-ing Expectations‘ piece do they really want to burn a year of his entry level contract?

Kansas City Star:  AEG, KC Mayor still want NHL or NBA teams, but only ‘under our terms’.  Seems that the Sprint Center is making a ton of cash for AEG without an ‘anchor tenant’ so will it be worth it to try and lure a team to K.C.  The one advantage they have over Q.C. is an NHL ready rink.

The Telegram:  Ready to prove himself again.  You forgot that a lot of these players come in after having been prized players in Junior.