Jets GM just happy to be here, They’re hockey happy on The Rock, Carolina blanks Winnipeg, not yet time to panic about Jets scoring woes, Bodie yearns to fly, Gagnon feels the love in Wpg, Its not whether you win or lose in pre-season and former Jets excited for NHL’s return.

Winnipeg Free Press:  GM just happy to be here.  Most of the Jets players and staff will be able to overcome the initial travel stress due to the excitement for the Jets return.

Winnipeg Free Press:  They’re hockey happy on The Rock.  The return of the AHL to St. John’s was just as significant to their community as the return of NHL hockey was to Winnipeg.

Winnipeg Sun:  The Rock is ready.  Was nice of  the citizens from Conceptions Bay South to allow the game to be moved to the Mile One Centre as it will be a great opportunity to welcome back/introduce hockey fans in Atlantic Canada to their new NHL team.

The Telegram:  A fortuitous faceoff.  While the Jets don’t have anyone from The Rock on their roster (unlike the Senators), hopefully a couple of defencemen from Atlantic Canada and the fact that the Jets are now the NHL affiliate of the team from there will be enough to give them the hometown edge.

Winnipeg Sun:  Carolina blanks Jets.  A lot of these guys are still unfamiliar with each other and that was evident from the sloppy play last night.

Winnipeg Sun:  Not yet time to panic about Jets scoring woes.  Only a handful of guys who played in last night’s loss are expected to be in the Jets NHL lineup.  The team that practice on Saturday at the IcePlex will be quite different by next week. 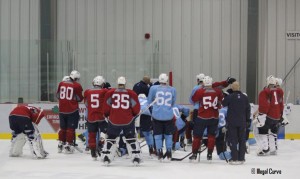 Globe and Mail:  Bodie yearns to fly with the Jets but….Another great read by MacGregor about a Manitoba boy who wants to play for the team (of sorts) he grew up supporting.

Vernon Morning Star:  Gagnon feels the love in Winnipeg.  When healthy he will start off  in St. John’s but all these young Jets seem to be loving the atmosphere in Winnipeg.

Winnipeg Free Press:  Its not whether you win or lose…No reason to panic as the Jets have yet to ice their actual NHL team yet in the pre-season.

NHL.com:  Boschman excited to see the Jets back.  A lot of former Jets have echoed these sentiments.  When we spoke on the Illegal Curve Radio Show with guys like Phil Housley and Freddie Olausson they were super pumped for the team to be back.