The Jets are back and Sunday Papers are back even stronger. A ton of Jets news today including Bodie plays the body, Wpg loves it Jets, Festerling been around block, Jets not popular in Newfoundland – yet, Jets’ preseason a blast for Winnipeg, single-game tickets sell fast, Byfuglien’s a rock star…

Winnipeg Free Press:  Bodie plays the body.  Still not sure why the ref didn’t call a charge on Stortini, although Enstrom showed some nice ability to avoid the check.

Calgary Herald:  Winnipeg loves its Jets.  The Conservative MP does a nice job of summing up what this team means to this city.

Winnipeg Sun:  Jets’ Festerling been around the block.  When you watch the Jets practice, the guys on the bubble are the ones who are making the most effort to get noticed.

CBC:  Jets not popular in Newfoundland – yet.  Hockey fans don’t switch their allegiances easily (see the Jets home opener when there will be a ton of Habs jerseys in the stands) but eventually the Jets will start to win over our Atlantic Canada brethren.

Globe and Mail:  Jets’ preseason a blast for Winnipeg.  As Roy correctly states, this game showed that Scheifele could still use some more seasoning before playing for the Jets.  If you still have your doubts, reach IC’s Richard’s article ‘Scheifele-ing Expectations‘.

Winnipeg Free Press:  Highlight Reel – Preds 4/Jets 3.  A shame they don’t use video review as the game winning goal by Hornqvist was clearly kicked in.  The Jets played a brilliant 1st period but the effort wasn’t as much in periods 2 and 3.

The Tennessean:  Predators’ Pekka Rinne gets stitches after being cut by puck.  A relatively harmless wrister from the Jets best player all game (Bryan Little) sent the goalie to the bench.

Winnipeg Sun:  Single-game Jets tickets sell fast.  We got messages that there were some issues early on but after a bit they got it ironed out and people were able to snap up these hot items.

Winnipeg Sun:  Byfuglien’s a rock star.  The kids were loving Big Buff and Zach Bogosian who was giving the kids pucks today at practice. 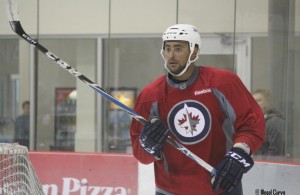