Winnipeg Free Press:   Jets just wanna have fun.  May as well keep it light while you can.

Winnipeg Free Press:  Make-or-break time for prospective NHLers.  The next week will tell the Jets management a lot of players and whether they will make it to Winnipeg, or spend the season in St. John’s will be determined during this time.

Winnipeg Sun:  Jaffray senses opportunity.  The Jets brain trust has stated that it isn’t your name or where you were drafted that will earn you a spot on the roster, so there is an opportunity for someone like Jaffray to work his tail off to earn a spot on the team.

Winnipeg Sun:  One wild weekend for Jets.  I will be curious to see if there are any Thrashers fans who make the 4 hour trek to Nashville to watch their former team play. 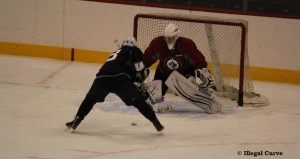 Globe and Mail:  Jets’ owners patiently plotted hockey’s return.  Chipman can certainly do no wrong right now and when he says things like this he can only further endear himself to this community:

“The community owns the team,” Chipman says. “Absolutely. We are maybe the trustees – but teams belong to communities.”

Winnipeg Sun:  Sickening message says a lot in a few words.  Bringing this within the framework of sports, if you are a true fan all you should care about is that the players wearing your team’s jersey represent your team, no matter which colour they happen to be.  (of course in my opinion, whether someone is white or black shouldn’t be an issue in any realm).

Winnipeg Sun:  Big weekend for Jets hopeful.  An even bigger weekend for Jets fans who get to put off their standard Saturday night dinner and a movie plans, to watch the first Jets road game.

Winnipeg Sun:  Neufeld unsettled by racist act.  As Evander Kane said, it was a classless move by some jerk.

Toronto Star:  Wings, Coyotes key players in NHL realignment.  Cox is right, Jets fans would probably put up with another season being in the East, if that’s what it took to figure out this mess.  As it currently stands, the league can’t really do anything with the Drama in the Desert still looming.

VOCM:  Hockey mania has hit hockey circles in St. John’s and the province.  The people of Atlantic Canada are showing their enthusiasm for the return of AHL hockey.