Winnipeg Free Press:  Noel loving every minute of Jets’ camp.   The 3 games in 3 nights is sure going to prove to be a difficulty for the Jets management.

Winnipeg Free Press:  Teammates take it easy on cleared-for-contact Wellwood.  A veteran player like Wellwood doesn’t need to prove himself in training camp so there is no need to risk injury.

The Telegram:  No atmosphere of entitlement with Jets.  Proper player development seems to be the mantra that the Jets 2.0 are following, and we see that as a good thing.

Winnipeg Sun:  Where will Jets end up?  This was one of the most hotly talked about topics once it was confirmed that Winnipeg was indeed getting an NHL team.  Realignment will continue to be a hot-button issue this season as teams who would like to get to the East (Detroit) are faced with reality that Quebec could get an NHL team which would further confuse this issue (depending on which division it comes from).

Winnipeg Free Press:  Debunking the myth of Jet-lagging.  Interesting that with all the concern over travel, the Jets are only 10th in the NHL in travel miles this season.  Another advantage is that they have a pretty young team that can likely handle the rigors of a lot of travel.

Globe and Mail:  Start the season already.  Once again Roy hits it on the head.  Every June when the Cup Finals are ongoing, you can’t help but wonder how they are still playing hockey when summer is in full swing.  Of course if the Jets were the team in the Finals, I don’t think Winnipeg fans would care when they are playing the games.

Winnipeg Sun:  Jets’ Wellwood eager for action.   Cleared for contact following his appendectomy surgery, sounds like he is eager to get going again.

Winnipeg Sun:  Split road trip hectic for Jets.  He was asked in the media scrum if he’s been asked to pick up a brush to help with the painting of the MTS Centre.  You can pretty much insert anything before hectic for Jets and it is going to apply this season.

Winnipeg Sun:  Jets have stopping power.  As Claude Noel said in the media scrum, he isn’t worried about his goalies. 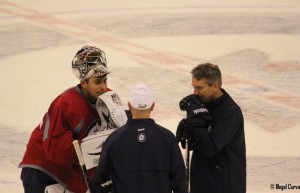 The Barrie Examiner:  Things looking up for Colts.  While people in Winnipeg won’t be happy to see #1 pick Mark Scheifele head back to the Barrie Colts, everyone in Barrie will be overjoyed to get him back for another season.