Winnipeg Free Press:  Jets, fans celebrate rebirth.  To hear Jets captain Andrew Ladd say it was as loud in Winnipeg last night as it was during the Stanley Cup Finals (between Carolina and Edmonton) is an indication as to what opposing teams can expect all season long.

Winnipeg Sun:  Scheifele turns heads in Jets’ NHL debut.  The kid was causing a buzz in the stands and in the press box, but he wasn’t exactly facing top notch NHL talent just yet.  We don’t want to be seen as raining on the parade because we think this kid is going to be a star in the future for the Jets, but there isn’t much point to putting too much on his shoulders too soon. 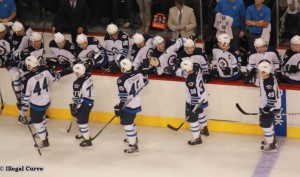 Winnipeg Free Press:  Scheifele making magic.  The home crowd would have been pleased with him skating around the ice, but the fact that he scored twice and added 2 assists had them cheering him all night long.

Winnipeg Free Press:  Split-squad affair a tale of two cities.  Read this so years from now if you want to know the answer to the inevitable Jets 1st exhibition trivia question, you will.

Winnipeg Sun:  Blue Jackets turn tables on Jets in Ohio.  Not to be forgotten in all the revelry is the fact that the Jets did technically go 1 and 1 on Tuesday, as the other squad failed to beat the Jackets in Columbus.

Winnipeg Sun:  Biggest Jets home exhibition debut since 1986.  It was a night of firsts in what is expected to be a season of many firsts.

Winnipeg Sun:  Big night for Bogosian brothers.  IC’s Ezra Ginsburg had post game interview with the Blue Jackets Aaron Bogosian and it turns out their dad came to watch his sons play in tonight’s game, as it was the first time they faced each other at the NHL level.

Winnipeg Sun:  One big Jets love-in.  As Andrew Ladd said in the post game scrum, is anyone worried about Buff’s weight now? 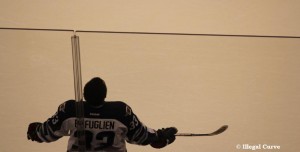 Globe and Mail:  Winnipeg Jets achieve liftoff.  It was a night like no other in Winnipeg for as far back as I can remember.  As Roy said, it was a meaningless game that held so much meaning.

Discover Moose Jaw:  Warriors McFaull still with Jets.  With cuts starting today, you can bet a lot of the younger players will be heading back to their Junior teams.

Winnipeg Sun:  Jets soar to first win.  The legend of the Jets 1st round pick is already being sung and I’m sure that none are happier (aside from his family) than his coach and legendary Winnipeg Jet Dale Hawerchuk. 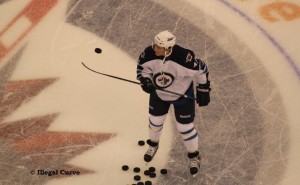 CBC:  Jets hockey returns to Winnipeg after 15-year separation.  The separation anxiety is finally over and you could almost sense that fans didn’t truly believe that they were finally cheering for ‘their own’ NHL team.

Winnipeg Sun:  Thrilled Jets fans pack arena.  And they chanted ‘Go Jets Go’ from before the game started, and continued to chant that until well after the game ended.

Detroit Free Press:  NHL wants realignment figured out by December.  Oh ya, I guess it is time to move Winnipeg into the West, but good luck figuring out which of the 3 teams speculated to be moving (Nashville, Columbus and Detroit), are actually going to head on East.