Jets news: Bogo’s status uncertain. Where the devil was Kane in warm-up? One is better than none in Jets’ emotional race to the finish. Jets aren’t miles behind the Isles. Fans get their money’s worth. Gutsy play pays off for Winnipeg Jets. Lubomir Visnovksy steals point from Jets.

Jets on a Deadline – Islanders 5 Jets 4 in shootout: Recaps, Post game audio from both rooms and coach Noel as well as a podcast from the press box.

Winnipeg Free Press:  Bogo’s status uncertain.  The hit by Okposo should be reviewed by the league.  His shoulder went right into Bogosian’s head and how the refs failed to call a penalty on the ice is beyond understanding.  Bogosian was rightly pissed off and tried to get to Okposo in the next few minutes.  Despite staying in the game he just wasn’t 100% and had to leave in the 3rd. 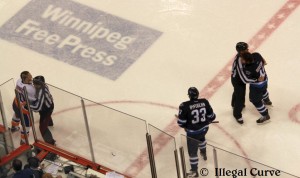 Winnipeg Free Press:  Where the devil was Kane in warm-up?  We didn’t notice until the pre-game skate was well underway and then it was uncertain what this meant exactly.  Coach Noel gave some vague answers post-game as to what this might have meant but it was likely because he has a lingering injury from the Tampa game.  If you watched Kane skating last Thursday and then again on Saturday, it wasn’t the same player.  Good for him for at least giving it a go knowing the importance of the game for his team.

Winnipeg Free Press:  One is better than none in Jets’ emotional race to the finish.  Looking at it from a  glass half full perspective is the best way in which to evaluate a tough loss to a very good Islanders team.

Winnipeg Sun:  Jets aren’t miles behind the Isles.  Considering the Jets played without Bogosian for parts of the game and a completely healthy Kane and they didn’t do too badly against the Isles.  Regardless of how you feel about Jokinen, his loss meant that coach Noel had to shorten the bench which makes it tougher on the other forwards.

Winnipeg Sun:  Fans get their money’s worth.   I jokingly tweeted that fans paid for the seat but only need the edge, and this proved correct as that was easily one of the most exciting games of the year. 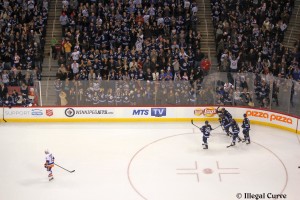 Winnipeg Sun:  Gutsy play pays off for Winnipeg Jets.  Even some of the players discussed post-game (listen below) that they were surprised that coach Noel pulled the goalie with just over two minutes to go in the 3rd.  However it worked out and so coach Noel gets the praise for that decision.

CBC:  Did You See That? Lubomir Visnovksy steals point from Jets.  Not only that he robbed Kyle Wellwood of his chance to cement his name in the record books with the first every hat trick for the Jets 2.0.

Yahoo Canada:  Barrie Colts win big, wrest home-ice advantage from Bulls.  After losing a close one last night, Mark Scheifele led his Colts in a 5-0 romp over Belleville.  He finished the game with three points (2 G, 1 A) and has now tied Vincent Trocheck for top spot in playoff points.

Jets on a Deadline – Islanders 5 Jets 4 in shootout: 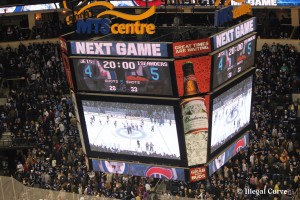 Illegal Curve Post-game podcast from the Press box: Host Drew Mindell and Analyst Richard Pollock break down the Jets play against the Islanders.

Illegal Curve Jets on a Deadline:  Game recaps, post-game audio, video highlights and the NHL.com 3 Stars of the night.