Jets news: Noel puts top trio among NHL elite. Respect due for Hainsey. Nod ‘an honour, obviously, but unexpected’. Santorelli finding his niche with Jets. Redmond’s rescuers to receive honour. Current Jets tackle trivia test. Vote of confidence. Zach Redmond returns to action with IceCaps. Hole in One for True North foundation. No love for shootout. Holy (bleep)! Wanting to resurrect Winnipeg White Out as they close in on playoff berth.

Jets opposition (Hurricanes) news: Skinner out, but not clear how long.

Winnipeg Free Press:  Noel puts top trio among NHL elite.  Led by Andrew Ladd they have certainly been red hot for most of the season and their importance to this team cannot be understated.  When they went cold the teams scoring shut down.  Now that they are red hot, the team finds themselves on a four game winning streak.

Winnipeg Free Press:  Respect due for Hainsey.  While he is often derided for his lack of offensive production, Hainsey has been a work horse, playing in all 42 games for the Jets and currently sits sixth in the league in blocked shots at 106.  As tirelessly as he has been on the ice, he worked just as hard for his fellow players during the lockout as a member of the negotiating committee.  For these reasons he was unanimously voted by the Winnipeg branch of the Professional Hockey Writers’ Association for the Bill Masterton Memorial Trophy. 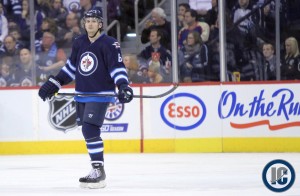 Winnipeg Free Press:  Nod ‘an honour, obviously, but unexpected’.  Surprising to see Ron Hainsey almost lost for words.  The always insightful Jets blue liner seemed touched that he had been nominated for the award.

Winnipeg Free Press:  Santorelli finding his niche with Jets.  He has been a nice fit with his new team.  Hopefully he can share his shootout skill with some of his team mates.

Winnipeg Free Press:  Burmi goes from doghouse to penthouse.  Such is the beauty of the NHL, that you can quickly find yourself going from dispensable to indispensable in the blink of an eye.  Once Burmistrov showed that he was willing to do what coach Noel & company were asking of him, he has been rewarded with more and more responsibility and ice time.

Winnipeg Free Press:  Redmond’s rescuers to receive honour.  As well they should since their quick thinking not only saved his career but also his life.

Winnipeg Sun:  Vote of confidence.  Paul gives his reasons for nominating Ron Hainsey for the Masterton.

Winnipeg Sun:  Zach Redmond returns to action with IceCaps.  Still cannot believe that he is returning to the ice so quickly after sustaining such a horrific injury.

Winnipeg Sun:  Hole in One for True North foundation.  Two major brands get together to feed off the popularity of the other.

Winnipeg Sun:  No love for shootout.  Fans would groan if a game got to the shootout as it was well known that Pavelec wasn’t having the best luck in these game concluding contests.  However something has changed of late (although that is clearly not his disdain for the shootout itself) as he has looked much better during the shootout. 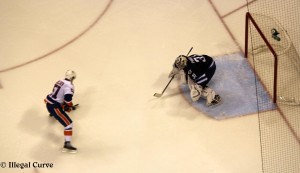 Winnipeg Sun:  Holy (bleep)!  Coach Noel showed some confusion when asked about being pixalated during the Jets/Bolts highlights.  Evander Kane adds some interesting thoughts on the refs.  Lots of praise for Ladd.  Coming of age for the 1st line.  Kane on the playoff race.

Globe and Mail:  Jets want to resurrect Winnipeg White Out as they close in on playoff berth.  I’m on record as saying I like the White Out tradition but I also think you shouldn’t put the cart before the horse.  This talk can pick back up at this time one week from today when the Jets have played their final game against the Habs and we should have a pretty good idea if they are in the playoffs or not.

Illegal Curve:  Coach Noel post-practice audio.  Pixalized after his disallowed goal.  Rarely is he demonstrative, what caused this?  Does he ever hear from NHL if they got call wrong. Ladd setting the tone.  Importance of players who have playoff experience considering number of players who have none on this team.  Any difference with Ladd’s line this season?  Did he talk before the season about being put together as a line?  Streaks – finding solutions.  Does he need to look back at the past Carolina game?  Any chance of Antropov tomorrow night?

News and Observer:  Skinner out, but not clear how long.  Jets fans won’t be seeing the smooth skating Skinner as he has returned to Raleigh following the game in Ottawa.

Globe and Mail:  Lowe in damage control after press conference gaffe.  It is a shame that he is back tracking because it is rare that someone actually speaks what is on their mind, so while you might not like what he said, those are clearly his thoughts.  His apology is simply a reaction to the negative response those thoughts he verbalized elicited.

Columbus Dispatch:  Dare to dream.  With the victory over the Ducks last night, the very surprising Blue Jackets have slipped back into the 8th spot in the Western Conference. 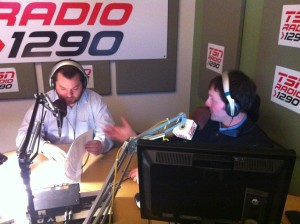