Jets on a Deadline: Post-game audio from both dressing rooms. Podcast from the Press Box. Coach Noel post-game.

Note:  Tune into the NHL Mid-Week Show on TSN Radio 1290 tonight from 6 pm to 7 pm (an hour instead of the usual two today) as the guys discuss all the latest NHL news.  Guest:  Ryan Rishaug (TSN)

Ottawa Citizen:  Homerism in NHL three star selection.  Jets middle of the pack in this analysis.  As we have selected the three stars before I can tell you that we try to pick the best players on the ice and do not focus on which jersey they wear.

Winnipeg Free Press:  Shootout ace Santorelli chips in.  Just how critical these two points will be remains to be seen but we might be looking back at this extra one at the end of the season.  Especially when you consider that all the teams the Jets needed to lose last night (Capitals, Islanders, Senators) won, with the exception of the New York Rangers.

Winnipeg Free Press:  Shootout at MTS corral.  Prior to game time, many were suggested a final score of 5-4 or 6-5 as the expectation was a high scoring affair.

Winnipeg Free Press:  Leadership of Ladd again is the key.  What more needs to be said about the leader of the Jets?  He was simply fantastic last night as he put the team on his back.  He now has more assists (23) this year in 43 games than he had in 82 games last year (22) and combined with his 18 goals has him 18th in the NHL for total points.

Winnipeg Sun:  Captain Ladd comes through.  His shootout goal was the insurance the Jets needed to secure the win and it was fitting that he scored it.  Even though shootout goals don’t count in an individual tally, it was technically Ladd’s 3rd goal of the game and some Jets fans desperate to see their first hat trick, tossed hats onto the ice in celebration.

Winnipeg Sun:  Just win baby!  Love it or hate it, the shootout is a reality and the Jets now have a secret weapon as Mike “shootout specialist” Santorelli helped this team secure a critical two points.  He wouldn’t share his secrets with us, but did share how much he enjoyed scoring in front of the MTS Centre crowd.  Here is a quick hit of his goal in the shootout last night.

Winnipeg Sun:  Third line gets kudos from coach.  Coach Noel showed what happens when he rolls out the lines as he got some significant contributions from Burmistrov and company last night.

TSN:  Jets run winning streak to four with win over Lightning.  After losing five straight the Jets have turned this sinking ship around.  They are still going to need to keep up this momentum and have some of their competition falter, but they have put themselves back into the playoff conversation. 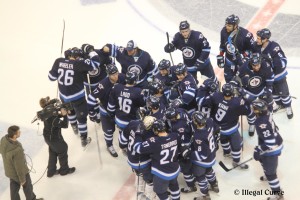 Coach Noel post-game presser. Following his team’s 4-3 SO win over the Lightning, coach Noel spoke with the media.

Illegal Curve Post-game podcast from the Press box: Host Drew Mindell and Analyst Richard Pollock break down the Jets play against the Lightning.

CBC:  NHL adds 5 outdoor games in 2014, including 1 in Vancouver says report.  In totally insane news, the NHL takes a unique concept and decides to mass produce it.

USA Today:  Top prospects await bottom teams.  There is another race going on as some teams fight for those final few playoff spots and that is a race to the bottom.  Once there you have a very good chance to add a significant piece to your roster with a good pick in the deep 2013 Entry Draft.

Globe and Mail:  Welcome to the mild, mild West.  Long gone are the days Smythe division dominance of Edmonton and Calgary.  Of course with the Jets moving West next season, Jets fans might not be too unhappy seeing the power outage in Alberta.