Winnipeg Sun:  Clitsome fitting right in.  You know you’ve done something right when the coach says that you have filled in quite nicely for the team’s top defenceman.

Winnipeg Free Press:  Playoff math? Just win, baby.   Unfortunately for the Jets that five game losing streak really might have cost them a post season spot.  They are now forced to play catch-up and all the teams they are attempting to overtake refuse to lose.

Winnipeg Free Press:  Enstrom out — now week to week.  Coach Noel modified his day-to-day assessment to the dreaded week-to-week which means we likely won’t be seeing Tobias for a little while. 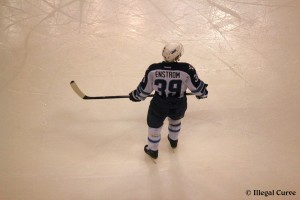 Winnipeg Sun:  News and Notes.  Ken covers the injury news regarding Enstrom as well as players staying focused and other missing Jets and IceCaps awards.

Metro News:  Jets take a tour of Canadian Museum for Human Rights.  The players had an opportunity for a sneak peek at the Museum which dominates the downtown landscape.

Edmonton Journal:  Coach Perry Pearn shocked at Zach Redmond’s return.  Interesting to read that of all the injuries that coach Pearn has been present for he considers Redmond’s the worst he has witnessed.

Illegal Curve:  A pictorial summation of the Winnipeg Jets open practice.  For those fans on the outside looking in, yesterday was a chance for those on the wait list to get preferential treatment.  Fans were given access to the Jets practice.  It was a party atmosphere inside the MTS Centre as approximately 2500+ showed up to watch their team run drills. 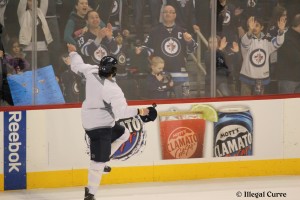 Illegal Curve:  Coach Claude Noel open skate audio.  Status of Enstrom (From day-to-day to week-to-week).  Playing without Enstrom.  Clitsome playing well with Byfuglien.  Watching the other games going on in the NHL yesterday?

TSN:  Kolarik nets hat trick as Penguins spoil IceCaps’ home finale.  Not the way the IceCaps wanted to end the season at Mile One Centre but fitting perhaps considering how things have gone for them this year.  Despite three assists from the captain they dropped their final home game and now head on the road to finish off the season.

Globe and Mail:  ‘Dream’ playoff matchups would be boon to CBC, TSN.  Considering how many Canadian teams might be in the playoffs this year many fans are saying “what lockout” and that has the above networks salivating.

Globe and Mail:  General managers on NHL’s firing line.  Could be quite a different look to a number of teams next season.