Winnipeg Free Press:  Enstrom not at practice after Tuesday injury.  The Jets can ill afford to lose the mobile defenceman who is an integral part of the Winnipeg back-end.

Winnipeg Free Press:  All 4 lines chipped in.  To truly have success you need all lines contributing and yesterday the Jets saw what happens when they use all the players they have.  The 4th line played well to start the game, drew an early penalty call and played solid defensively.  But as the Jets truly needed, the 1st line stepped up and contributed in a big way (Two goals and three assists for the line). 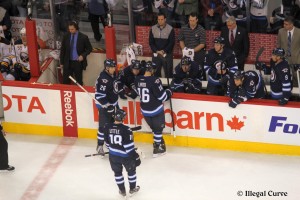 Winnipeg Free Press:  Sweet pass from Buff helps Gagnon notch his first NHL goal.  To get your first NHL goal and have it be a game winner is special, especially when it is also the #ICGWG.  Gagnon earned his 3rd star status last night, getting the game winner and also playing well on the PK.

Winnipeg Free Press:  Jets drop Sabres, enjoy winning feeling.  All the Jets did was maintain the pace since the teams they were trying to catch (Capitals, Islanders) both won last night as well.  While Buffalo didn’t look especially good last night they did come into the game riding a three game winning streak.

Winnipeg Sun:  Jets keep pace in playoff race.  Look at the above standings and you can see just how important last night’s win was for the Jets.

CBC:  Jets destiny rests on out-of-town scoreboard. Probably nothing more frustrating than to come off the ice after playing a complete 60 minutes and realize that all you did was tread water since the teams you needed to lose, for the most part, won last night.  The good news for Jets fans is even though the Capitals are blazing hot right now, teams 6-8 in the East are faltering and can be caught by Winnipeg.  And you find yourself cheering for teams you couldn’t imagine ever cheering for (i.e. Tonight when Jets fans will be forced to chant “Go Leafs Go” if they want to continue to see the NYR drop).

Illegal Curve:  Dustin Byfuglien and the Trade Market.  Defenceman?  Forward?  Little bit of both?  Richard takes a look at what Buff could net on the trade market. 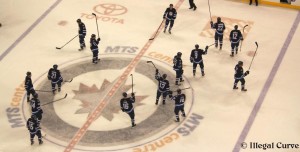 Illegal Curve Post-game podcast from the Press box: Host Drew Mindell and Analyst Richard Pollock break down the Jets play against the Sabres.

Illegal Curve:  Jets on a Deadline.  Game recaps, post-game audio, video highlights and the NHL.com 3 Stars of the night.

– As per @BrownScottTN – #IceCaps sign goaltender Juho Olkinuora to an amateur tryout contract.

The Telegram:  Dekanich backstops IceCaps to win over Pirates.  After a couple of losses over the weekend, the Caps managed to pull off a victory although it seems like it is only a matter of time before they are eliminated from having a chance to make the post season.

Yahoo Canada:  Barrie Colts sweep aside Oshawa Generals.  Mark Scheifele finished the game +2 with no points and is two back of the OHL playoff points lead.  He has helped his team cruise to their second straight series sweep and are now riding an eight game playoff win streak.