Jets news: From Ust-Kamenogorsk to NHL. Jets not on that next level. Two routes, one goal, Swimming in Jets’ stream. For Jets, it’s a defining week. D hasn’t improved this season. Jacob Trouba staying with billet family. End of the Affair? Jets catch scheduling break in final push toward playoffs.

Jets opposition (Sabres) news: Miller steps up for Sabres with time winding down. What will it take to get Regier fired?

IIHF:  From Ust-Kamenogorsk to NHL.  Jets Nik Antropov talks about his career, Winnipeg and Kazakh hockey.

Illegal Curve:  Dustin Byfuglien and the Trade Market.  Richard takes a look at what the Jets might do with the enigmatic defenceman.

Sportsnet:  Jets not on that next level.  While they are certainly not an elite team when you consider how poorly the teams around them have played, it isn’t difficult to envision this team making it to the playoffs.

Winnipeg Free Press:  Two routes, one goal.   The Southeast Division crown did seem to be the easiest route to get to the post season but with teams 6-12 as bunched up as they are, it isn’t out the realm of possibility that Winnipeg gets into the 6-8th spot.  Especially if the Capitals continue to play as well as they have of late.

Winnipeg Free Press:  Swimming in Jets’ stream.  For Jacob Trouba this is going to be quite the growth experience.  To think just a few weeks ago he was living at home continuing to be a product of the University of Michigan.  Fast forward to yesterday and he is participating in his first full practice with his new team.  About the only bad news for the Michigan native is his Maize and Blue Wolverines lost the National Championship basketball game last night.

Winnipeg Free Press:  For Jets, it’s a defining week.  Look at the standings above and the teams the Jets are playing are all below them in terms of position.  Can the Jets step on their rivals to move themselves forward?  They will have an excellent opportunity to accomplish same over the next couple of weeks.

Winnipeg Sun:  D hasn’t improved this season.  What has caused the Jets to completely remain stagnant despite coach Noel and his staffs attempt to improve team commitment to defence?  Put on your coach’s caps and share your thoughts on why the Jets have failed to improve! 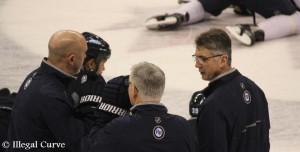 Winnipeg Sun:  Jacob Trouba staying with billet family.  As he gets acclimatized to the city, the Jets young defencemen is being helped to make the transition with a local family.  He looked good in yesterday’s full practice with the team although coach Noel remained guarded as to when he may see his first NHL action.

Globe and Mail:  End of the Affair?  This seems premature.   On one hand it injects the notion of Winnipeg losing a team by not supporting it and also somehow insinuates disloyalty because of booing.  I would suggest that fans in this market are sophisticated enough to boo if the team is not putting forth a sufficient effort and it doesn’t go any deeper than that.

National Post:  Jets catch scheduling break in final push toward playoffs.  Who would have thought that having a couple of days off between games would be such a luxury?  The Jets actually have four days between games between the game against the Panthers on Thursday (April 11th) and the Lightning on Tuesday (April 16th) which will give coach Noel and his staff time to give the players both rest and practice.

USA Today:  NHL power rankings.  The Jets are 0-19 on the power play during the past six games so somewhat appropriately they are listed in the 19th spot.

Illegal Curve: Coach Noel post-practice audio. Keeping focus on Buffalo. Having a full practice. Status of Ladd. Trouba fitting in. Any confidence facing teams below them in the standings? Top line finding net again. Approach to team defence, how has it gone after 40 games? Goals For down from last season (focus on power play). Guarding against being complacent. Warning signs. 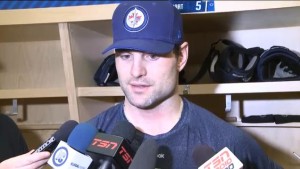 The Telegram:  IceCaps no longer practicing at Mile One Centre.  Positively odd situation the Jets farm club is experiencing with their home rink.  Could you imagine if the Jets were always working out at the IcePlex instead of the MTS Centre?  That is essentially what is happening in St. John’s apparently.

Buffalo News:  Miller steps up for Sabres with time winding down.  He is the face of the franchise and while there were reports around the trade deadline that he could be moved, the Sabres number one goalie has his team in the hunt.

Olean Times Herald:  What will it take to get Regier fired?  No punches pulled in this article about Buffalo’s GM.

Globe and Mail:  Coyotes sale not imminent.  I would suggest that the situation has become untenable, but that would have been the case years ago.  It is simply not fair to fans in Arizona to keep this dragging on and on.  If you have a buyer who will keep the team in the desert, then sell the team already.  How the 29 other owners are not putting pressure on the NHL to stop propping up this franchise is beyond understanding.

CBC:  Prime Minister to Gary Bettman – Let NHL stars play in Sochi.  Regardless of your politics, you can probably expect that this is a message which would be universally embraced by all Canadians.