Jets news: It’s all about intensity now. Buff just ‘sitting around a lot’ now. Weird week for Big Buff. For the Jets, a simple style is the solution. Coach Noel off day audio. Byfuglien & Hainsey audio.

Winnipeg Free Press:  It’s all about intensity now.  Coach Noel and his team will have to manage this “time off ” and find the right mix of rest and practice during the home stretch.

Winnipeg Free Press:  Buff just ‘sitting around a lot’ now.  Hopefully the burly D-man can use this perceived slight to motivate himself.

Winnipeg Sun:  Weird week for Big Buff.  You got the sense that Buff wasn’t pleased that his ice time was reduced but at the same time the team won the game.  Could giving him some additional rest down the stretch be just what the doctor ordered to get him back on his game? 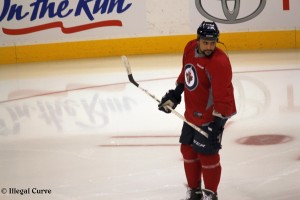 CBC:  For the Jets, a simple style is the solution.  Was it simply a matter of returning to basics for Winnipeg?

Yahoo Canada:  OHL roundup.  Mark Scheifele and his Barrie Colts took a stranglehold on their 2nd Round series with the Oshawa Generals as they won game 3 last night in Oshawa.  It was the seventh straight playoff victory for Barrie which looks to be cruising to the Eastern Conference championship.  The Jets 1st round selection in the 2011 Entry Draft had two assists which gave him 15 points (5 goals, 10 assists) and has him first overall in playoff points.

CBC:  Red Wings, Maple Leafs to clash at outdoor game.  The NHL probably should have waited until after the NCAA baskeball tournament was over before they announced the game between the Leafs and Red Wings is back on in Ann Arbor.  The University of Michigan Wolverines basketball team are taking on the Louisville Cardinals in the Championship Game tonight in Atlanta so most eyes in Michigan are focused elsewhere.

National Post:  Bettman ‘not planning on moving’ Coyotes from Phoenix.  Ask fans in Atlanta if they believe that?  While I am sure the league would prefer the Coyotes to remain in the desert, that can only happen if they find viable ownership, which hasn’t exactly been easy, despite all the tire kickers.

Globe and Mail:  Kings, Ducks hope to stage outdoor hockey in LA next January.  When someone says outdoor hockey, L.A. as a location just doesn’t come to mind.  Although I’m sure media when given the option of a Winter Classic in California instead of Michigan in January might jump at the opportunity.

Part 2:  Should Dustin Byfuglien be a forward or a defenceman?  Evander Kane leads the league in minor penalties assessed.  Interview with Anthony SanFilippo of PhiladelphiaFlyers.com.  Math on the Jets making the playoffs. Winnipeg Jets Over/Under.  Keys to the game: Winnipeg Jets vs. Philadelphia Flyers.