Note: Stay tuned to @illegalcurve as we will be at practice today and will have post-practice player and coach Noel audio.

Winnipeg Sun:  Weird week for Dustin Byfuglien.  You could tell that he is less than pleased about losing the minutes but it is also clear that he will do what the team needs to win.

Winnipeg Free Press:  Jets remain predictably unpredictable.  Gary is 100% right.  Who knows what is next.  However to get a sniff of playoffs, they are going to have to turn on the afterburners and torch the competition.  They no longer have the luxury of finishing .500.  They need a significant run over the next eight games to give themselves a chance.

Winnipeg Free Press:  As goes Kane, so go the Jets.  The Jets got primary scoring from their big guns and Evander Kane’s goal really put the exclamation point on the game for Winnipeg. 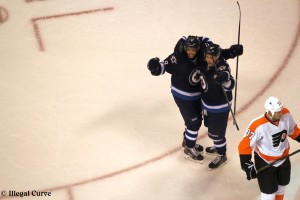 Winnipeg Free Press:  Top trio steps up.  We see what can happen when the Jets top line is engaged.

Winnipeg Sun:  Finally find net in big way.  Four unanswered goals in the 2nd period.  As we tweeted yesterday, who are these guys and what have they done with the Jets?  For those watching it was nice to finally see some pucks finding the back of the opposition net.  Ken also covers boost by Redmond visit, Schenn taking an Enstrom slapper and the organization adds some goalie depth.

Winnipeg Sun:  Yo-Yo Jets bring A game.  Time to get off that merry-go-round of inconsistency.  Playoff teams have to show a consistency that has eluded Winnipeg so far.  Will they be able to get things changed up in the final three weeks of the season?

Winnipeg Sun:  Jets stop the losing.  Time to start a new streak.  With games against Buffalo (Tuesday) and Florida (Thursday) the Jets can very easily swing the momentum and their fortunes around quickly.

CBC:  IceCaps lose to Marlies.  One of the lone bright spots for St. John’s this season has been the play of Eric O’Dell who scored a couple of goals in the loss to Toronto, pushing his total on the season to 28 in 52 games.

Winnipeg Free Press:  College goalie Olkinuora signs with Winnipeg reports say.  Always good to add some depth at goalie.  If you want a more in-depth look at who this young netminder is Hockey’s Future did a feature on him a few days ago.

Barrie Colts:  Mark Scheifele and his Barrie team mates attempt to make it seven wins in a row in Game 3 action tonight at 6:05 pm EST as they take on the Oshawa Generals in Oshawa.

Illegal Curve Post-game podcast from the Press box: Host Drew Mindell and Analyst Richard Pollock break down the Jets play against the Flyers.

Video of the Night -Zach Redmond speaks during Jets game: