Jets opponent news: Mike Ribeiro one of the few things going right for Capitals this year.

Note: Make sure to @ tweet @illegalcurve with your guess during tonight’s game you can win IC Gear by participating in our twitter Game Winning Goal and 50/50 contests. Remember that for your vote to qualify you must send in your guess by hashtaging (#) our Game Winning Goal (GWG) contest and 50/50. (i.e. #ICGWG Thorburn and #IC5050 $40,685).

Winnipeg Free Press:  Ladd happy about quick rematch, anxious to reverse result.  Being in the Jets room last night I can tell you that the one word I would use to describe the Jets captain would not be happy.

Winnipeg Free Press:  Flat Jets hand Caps two points to help rivals’ playoff chances.   While you wanted to see the Jets bring a high level of compete last night it simply was not evident.  Hopefully this evening will be a better effort.

Winnipeg Free Press:  You could almost see this thing coming.  So far this season both Capitals games have been brutal.  Hard to believe that this is the same team that stayed close and knocked off Boston on Tuesday.

CBC:  Will Jets show up in rematch with Caps?  It is extremely difficult to sweep these types of double header games, so that at least plays in the Jets favour.  Of course they should be Fueled by Embarrassment of last night’s loss and that should be sufficient to get them motivated to win tonight.

Winnipeg Sun:  Golden opportunity lost by Jets.  The Jets had an opportunity to step on the throats of the Capitals last night but instead they offered them this glimmer of hope.  Ken also touches on Miettien’s close calls, decision on Pavelec, potential injury to Stuart, James Wright scrap.

Winnipeg Sun:  No point dwelling on loss says Jets captain Andrew Ladd.  Nothing you can do about it.  The Jets played a stinker and they have almost no time to get things turned around as they face the Capitals again tonight. 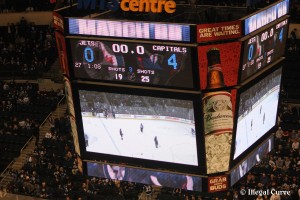 National Post:  Mike Ribeiro one of the few things going right for Capitals this year.  It was why his name was being mentioned as possible trade bait if the Capitals had continued to slide.

Star-Ledger:  Martin Brodeur scores goal in return as Devils top Hurricanes, 4-1.  Not bad for a return from injury.  Forget the big win, Brodeur added to his goals total.

Globe and Mail:  NHL suspends Joffrey Lupul for two games.  Despite it being his first infraction it seemed like a very suspend-able offence.  Good call by the NHL.