Note:  Tune into the Illegal Curve Hockey Show on TSN Radio 1290 today as the guys (and myself) discuss all the latest Winnipeg Jets and NHL news starting at noon until 3 pm.

Winnipeg Free Press:  Enstrom turning corner, could return, hints Noel.  Someone to quarterback the power play is exactly what the doctor ordered for the Jets 27th ranked pp.

Winnipeg Free Press:  Contender, or pretender?  After giving up a chance to step on the Capitals throats and essentially eliminate them from catching the Jets, the above caption was inevitable.  In two games against a division rival the Jets gave up 10 goals and saw a lot of this type of celebrating as compared to the measly one goal they scored in response. 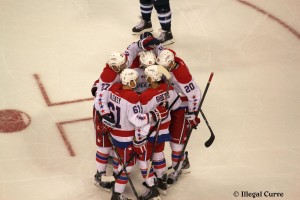 Winnipeg Free Press:  Hope and ruin – both are distinct possibilities.  Amazingly the Jets remain in 3rd spot in the Eastern Conference.

Winnipeg Free Press:  Kane still optimistic with eye on Tampa.  As he should be.  It isn’t as if Winnipeg is 14th and just blew a chance to climb into playoff contention.  While losing another two games to a division rival certainly didn’t instill confidence in this team, they won’t be throwing in the towel.

Winnipeg Free Press:  Spotlight on Evander Kane.  Taking a look at the evening the Jets power forward had yesterday.

Winnipeg Sun:  No magic solution for what ails Jets.  The look on the coach’s face as the game concluded said it all.  Prior to last night’s game he indicated that we would see what type of team the Jets were as they looked to rebound from Thursday’s loss to the Capitals.  While his post game presser certainly wasn’t doom and gloom, he is clearly not happy with his troops. 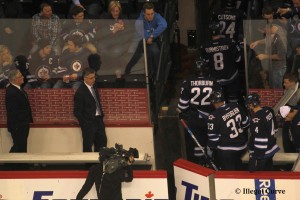 TSN:  Better effort, but similar result for Jets vs. Caps.  Unlike on Thursday, the feeling was had the Jets scored quickly in response to the Capitals first or even second goal they could have been back in that game.

Winnipeg Free Press:  Operation mystery ailments.  It is certainly humourous when you heard Buff describe his injury as wax in his ears last month.  Teams love to give the generic upper or lower body injury statement.  Ed with a very interesting article on this position teams adopt with respect to injuries.

Illegal Curve:  Jets will face Bruins in Saskatoon for pre-season game.  This game was supposed to have taken place during this past summer but was a victim of the lockout. 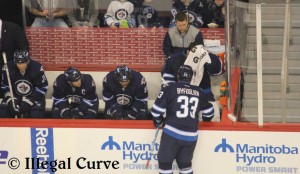 Columbus Dispatch:  Flamed in a flash.  All it took was 1:15 to give the Blue Jackets three goals and another victory as their improbable 12 game points streak continues.  While Jets fans haven’t paid much attention to the West this season, Columbus is on is quite an impressive run for a team that has gone from the basement to tied for 8th spot.

Pittsburgh Post-Gazette:  Slow start, fast finish for Penguins.  One team you cannot help but notice are the Pittsburgh Penguins who did the Jets a favour last night as they polished off the Islanders for their 11th straight victory.