Jets news: Beware the slides of March. Let the good times roll in Winnipeg. A make or break weekend. Antropov ends scoring drought. Jets fight to get on same page. Jets face critical test in Toronto. Audio from coach Noel and several players from prior to departure for Toronto.

Winnipeg Free Press:  Beware the slides of March.  We are about to find out what type of team we have here in Winnipeg as they play an extremely important stretch of their season.

Globe and Mail:  Let the good times roll in Winnipeg.  Shoalts was in Winnipeg the last week checking out season number two and discusses what he sees from a team that has been in Manitoba for 17 months.

Winnipeg Sun:  Antropov ends scoring drought.  He had been a focus of fan ire for his peripheral play but Jets fans got a taste of what Nik Antropov can bring to the table during the past couple of games.  Paul also takes a look at the success that Pavelec’s play has had on the team and what some Jets like Kyle Wellwood think of the upcoming trade deadline. 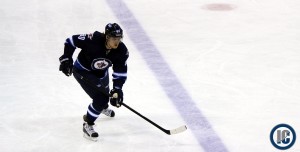 Winnipeg Sun:  Jets fight to get on same page.  While fans will often base success on stats, you sometimes have to look at the intangibles that don’t show up on the box score as a measuring stick of a players impact.  Many nights a player can have no goals or assists but still have a huge impact on the game.  Takes James Wright for example.  He remains without a goal in 25 games for Winnipeg this season but has played a significant role killing penalties.

Winnipeg Sun:  Jets face critical test in Toronto.  The Leafs have lost four in a row and will be very hungry for revenge following a road loss in Winnipeg this past Tuesday.  It was a game that had a playoff like feel at the MTS Centre and tonight, on Hockey Night in Canada, it should prove just as exciting.

Winnipeg Sun:  Jets face make or break weekend.  While it feels redundant to continue to say the same thing over and over again, the importance of these two games against teams ahead of the Jets in the standings should not be understated.  Ottawa sits in 5th with 32 points, the Leafs are 7th with 31 points, whereas the Jets currently sit alone in 8th with 30 points having one game in hand on both teams.  A strong weekend could see the Jets move into the middle of the pack in the East or fall below the line.  The Sens play the Sabres today in Buffalo and then fly home to face the Jets tomorrow.

Illegal Curve: Coach Noel.  Injury update (Discussed Montoya). Going with same lineup. Play of Ondrej Pavelec. Inter-conference play builds rivalries. Preparing for the Leafs, different because of their situation? Keeping focus short term. Phyiscal edge to the Jets play. Improvement of Zach Bogosian. Play of the lines together. Not using the 4th line, concerning? With Slater out, who becomes go to face off guy? James Wright under the radar? (coach made an interesting comparison to Guy Carbonneau who went from being offensive in AHL to defensive specialist in the NHL).

The Telegram:  IceCaps put a stop to home-ice losing streak with shutout win over Bulldogs.  The Mile One Centre in St. John’s is finally a fun place to be after the IceCaps ended an eight-game losing streak with a convincing 5-0 win last night.  Goalie Mark Dekanich stopped 23 Hamilton shots for the shut out in his first game since the end of February.

The Michigan Daily:  Trouba’s pair of goals helps Michigan win Game 1 over Broncos.  The CCHA quarterfinals are underway and the Jets number one pick in 2012 led his team to victory last night over 3rd ranked Western Michigan.  The second game in the best of three series goes tonight in Kalamazoo.

Globe and Mail:  Looking to put lingering memories to rest.  With a four-game losing streak comes talk of implosion as the crazy hockey market is facing considerable consternation over the current state of their team.

National Post:  Joffrey Lupul’s return a spark for more balanced lineup.  Hey you shouldn’t knock a head coach when he makes a joke.  Coach Noel said Jets would score 45,000 power play goals and while they have fallen well short, the pp has improved, so perhaps coach Randy Carlyle has looked into his crystal ball and seen Lupul scoring 100 goals upon his return.  His return against the Jets adds some firepower that this team could have used during the last game in Winnipeg.

Globe and Mail:  Jarome Iginla to the Kings? Not so fast.  Eric Duhatschek takes a look at why the Flames captain wouldn’t be as good fit a fit now that he might once have been in L.A.  He also looks as the Corey Perry situation in Anaheim as well as a number of other NHL related topics.

CBC:  Teams ponder moves as trade deadline nears.  With three weeks to go before the trade deadline talks starts to heat up although with so many teams in contention right now we likely won’t see any big moves for some time.

Buffalo News:  Regier takes long view on Grigorenko’s demotion.  After the splash they made last season and with expectations in Buffalo to challenge for the Stanley Cup, they are now having to change philosophy.  Returning Grigorenko to the Quebec Remparts of the QMJHL after 22 games this season with the team seems to be part of that long-term vision although they have now burnt a year off his entry level contract.

Video of the Day:
Pure brilliance.  Laughed out loud a couple of times.  Gotta give credit to both tenders for having such great senses of humour about their unusual situation.