NHL news: NHL’s realignment is official but will it make a difference?

Note II: The players won’t be practicing but will be available before they head to Ontario for two games so stay tuned to @illegalcurve for more audio.

Winnipeg Free Press:  Greed would be good right now.  Despite the recent hot streak the Jets simply find themselves in a tight race for the last few playoff spots, but they have a chance to take top spot in the Southeast as last night’s win put them one point back of the Hurricanes.  Would be a sight for the ages if the Jets had a Southeast Division banner hanging from the MTS Centre rafters.

Winnipeg Free Press:  Pleased, but hardly satisfied.  The Jets players were still critiquing their game following the win.  While Ron Hainsey said it was the best two games the team has played in his time with the Atlanta/Winnipeg organization he still mentioned the mistakes he made during the game.

Winnipeg Sun:  Finally learning to seal the deal.  If you want to be a playoff team, that is exactly the type of game you need to win.  Paul also covers the next challenge, Miettinen’s ‘beautiful’ goal, getting a good start, wild 1st period, Jets moving conferences and Big Buff’s Rapid Fire video hilarity. 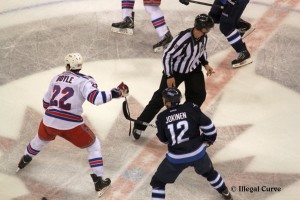 Winnipeg Sun:  Heading to Western Conference next season.  No longer destined to be the team logging huge travel distance, it will be nice to finally play in the West.

Winnipeg Free Press:  Chipman talks Heritage Classic.  Seems like this is a done deal and it just need to be made official by the NHL.  So far in our Poll, the majority want to see a team from the Jets new division.

Globe and Mail:  NHL’s realignment is official but will it make a difference?  Two happiest teams have to be the Detroit Red Wings and Winnipeg Jets who are finally on the right side of the divide.