Note:  Make sure to @ tweet @illegalcurve with your guess in our contests.  During tonight’s game you can win IC Gear by participating in our twitter 50/50 and Game Winning Goal contests. Remember that for your vote to qualify you must send in your guess by hashtaging (#) our 50/50 contest or the Game Winning Goal (GWG) contest. (i.e. #IC5050 $43,875 or #ICGWG Slater).

Winnipeg Free Press:  Real Jets, or just body doubles?  That’s pretty interesting that they hired body doubles to shoot the video.  Who would @ICEzzyG best be able to act as?

Illegal Curve:  Coach Noel pre-game.  Update on injured players.  Missing Peluso.  Burmistrov game-time decision.  Importance of scoring from lower lines.  Six of eight at home.  Getting back to MTS.  Telling players what to do in a shootout?  Getting the players to play the right way.  Seeing enough from this group to get to the playoffs?  Play of Meech.  Burmistrov’s laughing on bench and the maturing process.

Sportsnet:  Don’t bet against the Jets.  As always Chris Johnston does a tremendous job, this time breaking down the community feel around this Winnipeg organization.

Winnipeg Free Press:  Home needs to be sweeter.  Of all the mistakes missing the net seems to be the Jets worst error.  Too often they shoot way wide which allows the puck to escape the zone and sets the opposition on a rush.  It also prevents any chance of scoring.  The Jets need to take advantage of the friendly confines of the MTS Centre.

Winnipeg Free Press: Long-term planning means Noel is here to stay.  Calls for the coach’s head on a silver platter seemed premature and as Gary writes, based on the long-term vision of the Jets, he won’t be going anywhere anytime soon.

Winnipeg Sun: The NHL’s true enigma.  The Jekyll and Hyde nature of this time is quite puzzling.  In the games you expect them to excel they fall apart and the ‘tough ones’ they suddenly show up.  This home stand will prove quite telling what kind of team we have here in Winnipeg. 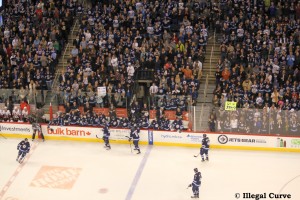 Winnipeg Sun:  Jets still not happy? That’s good, says Wyman.  This team flirts with getting above the line and then falls short and then gets back up again.  They were rightly not happy with their final performance on the road and will hopefully take that into tonight’s game against 5th place Toronto.

Winnipeg Sun:  Goalies are team’s lifeline.  There can be no question that the Jets tenders won them some points last week.  But it was good to hear Ondrej Pavelec acknowledge following the Devils game that they cannot continue to play like that and expect to win.  Ted also covers Burmistrov being benched, vaunted Jets PK, points parade and Evander Kane coming alive. 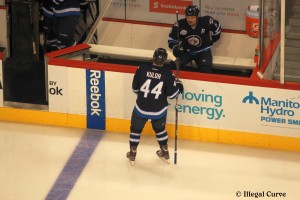 OHL:  Colts Scheifele named player of the week.  He had an impressive nine points in just three games, games that he helped his team win.  He has helped to position his Barrie team to within two points of the 1st place Belleville Bulls.  The Colts return to action on Thursday when they take on 7th place Kingston.

Winnipeg Free Press:  Scheifele’s fire still burns.  Tim caught up with the Jets 2011 1st round draft pick and found that he is still aggressively getting ready for the NHL.

Winnipeg Free Press:  Trouba named to all-rookie team.  While his Michigan squad has had a tough season, Trouba has been having a year to remember and now can add this to his growing list of accomplishments.

Toronto Sun:  Leafs GM in no hurry to deal UFAs.  Which is why the trade deadline could be so interesting.  If teams continue to stay bunched up it will be quite interesting to see what people are willing to pay for the chance to win now.

National Post:  Joffrey Lupul rejoins Leafs at practice but unsure of return.  Fear not Jets fans as he will not be making the trip to the Peg.

Calgary Herald:  Scouts flock to L.A. as Flames further cement position in West cellar.  It is like watching vultures circle an animal carcass, the Calgary Flames might finally begin the purge many wanted to see occur a few years back.

Toronto Sun:  Sidney Crosby says Quebec City ‘obvious choice for expansion’.  Hockey fans in Quebec have to be happy to have the endorsement of the greatest player in the NHL.

CBC:  30 Thoughts.  Elliotte Friedman’s articles are just a great read to stay informed on what is happening around the league.  His primary focus is on the Ducks signing of Getzlaf and what this means for Perry and then he goes into his 30 Thoughts.