Jets news: Nobody happy after one gets away. ‘Worst period of the year’. Players keen on outdoor contest. Erratic Jets earn points in spite of themselves. Is the Winnipeg Jets’ glass half-full or half-empty? Winnipeg trades Spencer Machacek to Columbus for Tomas Kubalik. With possible 2016 Heritage Classic in Winnipeg – You pick the opponent!.

Winnipeg Free Press:  Nobody happy after one gets away.  They shouldn’t be happy they should be ecstatic.  How they escaped New Jersey with one point is quite unbelievable.  They certainly didn’t deserve it aside from the strong play of Ondrej Pavelec.

Winnipeg Free Press:  ‘Worst period of the year’.  Ondrej Pavelec made that comment after the game and he is correct.  The ice seemed angled towards the Jets zone as the Devils had all the momentum.

Winnipeg Free Press:  Players keen on outdoor contest.  It is quite clear that Slater loves playing in Winnipeg and would probably like to keep playing here so he can add another outdoor game to his list of memorable hockey games.

CBC:  Erratic Jets earn points in spite of themselves.  Finishing this road trip with five of a possible eight points and now returning back home to play six of eight at the MTS Centre has set this team up nicely for a 2nd half run at the playoffs.  End of the day all that matters is the fact that they walked out of Jersey with a single point and it will be up to coach Noel and his staff to figure out why his team was so lackluster.

Winnipeg Sun:  Is the Winnipeg Jets’ glass half-full or half-empty?  The subject of debates at water-coolers across Winnipeg this morning has to be what this team should be doing.  Fans across the internet are debating whether the Jets should try and win now or continue building for the future.  While both sides will argue the value of their position, we won’t know until the playoff picture crystallizes which was the best option.  Kirk also talks about Evander Kane’s shooting, Burmistrov sitting, Wellwood getting the message, shootout choices, play of Tangradi, Pavelec’s play, Jets win averages, Slater on the faceoff and finally scoring from third and fourth lines. 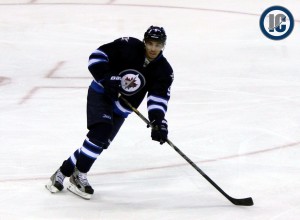 Illegal Curve:  Jets on a Deadline – Devils 3 Jets 2 in a shootout.  Game recaps, post-game quotes, video highlights and the NHL.com 3 Stars of the night.

Illegal Curve:  With possible 2016 Heritage Classic in Winnipeg – You pick the opponent!  Seems like a forgone conclusion that the Jets will host the Heritage Classic and not surprisingly almost immediately the next big topic of conversation was who should the opponent be?  Seems like most fans want to see either the Wild or a team from Western Canada.

Barrie Colts:  Colts extend their winning streak to six games.  It was a five point night for the Jets #1 draft pick in 2011 as Mark Scheifele had three goals and two assists to lead Barrie to victory.

Globe and Mail:  Life in hockey’s fast lane proving costly.  Jets fans need look no further than what could have happened to Mark Stuart in yesterday’s game against the Devils when an automatic whistle on an icing may have prevented that dangerous situation.  While Stuart proved to be fine and came back to the game moments later, it could have been a lot worse.

Pittsburgh Post-Gazette:  Malkin will be out of lineup 1-2 weeks.  Good news for Penguins fans is they have this other guy named Sidney Crosby who is tearing up the NHL right now.  Even better news for the Pittsburgh is that this is expected to be short term.

Chicago Sun-Times:  Blackhawks starting new streak – drop 6-5 loss to Oilers.  Oh boy.  Just like that the points streak was erased and now the Hawks are starting a different streak, a two game losing streak.  Considering how much hockey they have played it is amazing that they were able to maintain things as well as they did.  Coach Q is giving his team two days off before they depart on a road trip.