Jets news: Ladd employee of the month. Power play provides nice break for opponents. No. 1 goalie’s number’s up. Fan has won 50/50 twice already this season. Noel preaches value of being greedy. Are the Jets for real? Redmond injury make Jets pull together.

Note:  Tune into the Illegal Curve Hockey Show on TSN Radio 1290 as the guys discuss all the latest Winnipeg Jets and NHL news from 8 am to 11 am on Saturday (That is not a typo.  With the Jets/Capitals game starting at 2pm, the guys are getting up early, for the second week in a row, to provide you with all the latest news).  Guests:   Pat Hickey (Montreal Gazette), Joe Beninati (CSN Washington) and Jeremy Weiss (Weiss Tech Hockey).

Note II:  Make sure to @ tweet @illegalcurve with your guess in our contests.  During tonight’s game you can win IC Gear by participating in our twitter 50/50 and Game Winning Goal contests. Remember that for your vote to qualify you must send in your guess by hashtaging (#) our 50/50 contest or the Game Winning Goal (GWG) contest. (i.e. #IC5050 $40,350 or #ICGWG Ladd).

Winnipeg Free Press:  Ladd employee of the month.  He isn’t just leading the team in many scoring categories.  In fact the Jets captain has earned his way into the top five for goals in the NHL.  He had a February to remember and attributed a lot of his success to his linemates and his confidence.

Winnipeg Free Press:  Power play provides nice break for opponents.  The joke around town whenever the Jets have been awarded a power play by the zebras is whether it would be possible to decline the opportunity.

Winnipeg Free Press:  No. 1 goalie’s number’s up.  When I asked him how he felt having played 18 of 20 games so far this season he told me that he looks forward to the challenge of playing every night.  When questioned about his actual numbers he remarked that it was not something he paid much attention to.  And the truth is when he is playing like he has over the past six games not many will question his disinterest in stats.

Illegal Curve:  One Winnipeg Jets fan won the 50/50 draw not once, but twice this season.  A remarkable story about a Jets fans at the MTS Centre who has won twice this season, which saw him take home over $80,000.o0.

Winnipeg Sun:  Noel preaches value of being greedy.  Importance of clean wins continues as next four games are against divisional opponents.  Also covered in this article was the Jets use of tennis balls in practice, Miettinen’s unfortunate injury location, Thorburn’s limited ice time and Eric Fehr’s return. 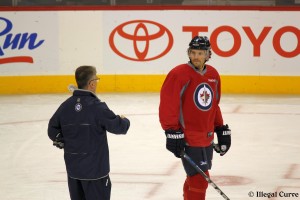 Winnipeg Sun:  Are the Jets for real?  Another great article by Paul and you have to love the answers by some of the players.  The always pragmatic Ron Hainsey gives some good replies to the questions asked by Paul.

Winnipeg Sun:  Redmond injury make Jets pull together.  Teams often have to find a rallying point and it looks like the Jets are using the horrific injury to Zach Redmond as their rallying cry. 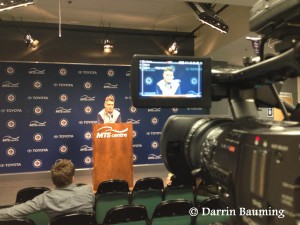 TSN:  Monarchs take down IceCaps in shootout.  Eric O’Dell continues to be a bright spot in a season to forget over in St. John’s.  The 22 year old had a two goal, 1 assist game in the loss but the IceCaps just cannot seem to get any traction as they sit 14th in the Eastern Conference.

Barrie Colts:  Colts clinch Central Division with win.  Back in the lineup, Mark Scheifele had two assists as he helped his team clinch the Central.

Swift Current Online:  Laurikainen leads Broncos over Hitmen.  Adam Lowry had a goal and is inching closer to 200 points (he currently sits with 196) in the WHL.

Washington Post:  For last-place Capitals, month of March is ripe with opportunity.  The Capitals need to be playing with a sense of urgency as their season slips away.  Will be interesting to see the type of game they play in Winnipeg today.

Washington Post:  Mike Green aggravates groin injury.  If you missed this news yesterday, the Capitals defenceman did not make the trip to Winnipeg due to this aggravation.

Chicago Sun-Times:  Blackhawks extend points streak to 21 with overtime win.  Once again the Hawks rolled and won in OT.  Biggest test comes on Sunday against the Red Wings.

Globe and Mail:  Flames dodge disaster, not embarrassment on O’Reilly.   The situation in Calgary had heads spinning and mouths yapping all across the nation on Friday as more and more of the news came to light.

Globe and Mail:  Trade action begins heating up around the NHL.  As always Duhatschek provides a good read on the latest trade talk to his the NHL.