Note:  Tune into the Illegal Curve Hockey Show on TSN Radio 1290 as the guys discuss all the latest Winnipeg Jets and NHL news from 8 am to 11 am on Saturday (That is not a typo.  With the Jets/Capitals game starting at 2pm, the guys are getting up early, for the second week in a row, to provide you with all the latest news).  Guests:   Pat Hickey (Montreal Gazette), Joe Beninati (CSN Washington) and Jeremy Weiss (Weiss Tech Hockey).

Winnipeg Free Press:  Ladd leading the way.  This just in…your captain after his two goal performance last night is now 20th in the league in points (20 in 20 games) and tied for 4th overall with Tomas Vanek in goals (12).

Winnipeg Free Press:  Jets believe in Jets.  They may not be the prettiest wins in the league but at the end of the day all that counts is whether or not you have two points on the board as the final buzzer sounds.  After putting together five wins in last six, it isn’t just the Jets who are believing in the Jets, as you can add the fans to that list.

Winnipeg Free Press:  Buff, Ladd dynamic duo in charge-and-score play.  In order for the Jets to continue having success they need Buff to continue to be the dominant player fans know he can be.  We saw flashes of the old, non-injured Buff last night as he slowly gets back to form.  The game winning goal he set up was a thing of beauty.

CBC:  Captain Ladd driving the Jets success.  When you see your captain playing hard you have to hope that the rest of the team will follow his example and right now it appears that this Jets team is doing so.

Winnipeg Sun:  New and improved Winnipeg Jets finally find a winning recipe.  Who are these guys and what have they done with the other Jets squad?  You know, the one that couldn’t put together this many wins in a row.  Contributions are coming from across the board.

Winnipeg Sun:  Pavelec doesn’t play numbers game.  He is now the all-time franchise leader in games played but even more impressive is he has played 18 of 20 games this season and has been getting better throughout this lockout shortened season.

TSN:  Ladd ties record for fastest goal in a game.  Without doing a google search, would you know who has the record that the Jets captain has now tied? 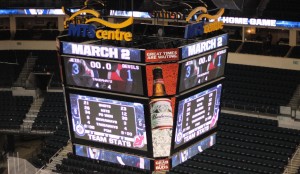 Coach Noel post-game presser: A lot of Joy in Joyland.

Illegal Curve Post-game podcast from the Press box: Host Drew Mindell and Analyst Richard Pollock break down the Jets play against the Devils.

Denver Post:  Avs beat the Flames on and off the ice.  O’Reilly should be sending Flames Jay Feaster a nice bottle or six of wine after the Avalanche matched the Calgary offer and will now pay O’Reilly 10 million for the next two seasons.

Globe and Mail:  Drouin’s meteoric rise to prominence propelled by social media and viral videos.  Lots of talk about this prospect.  You could even say “people are talking”.