Jets news: Man (dis)advantage could keep Jets from postseason. Laughter the best medicine for Noel. So much for win streak. Wheeler shakes off pain, Jets breathe sigh of relief. Bellicose Bogo won’t take guff. Shortcomings too much against the Capitals. No power in the power play. Anthony Peluso gives Winnipeg Jets a fighting chance. Jets give us that sinking feeling again. Winkler’s Fehr makes Capital gain on Jets. Streaky Jets come up empty against Capitals.

Winnipeg Free Press:  Man (dis)advantage could keep Jets from postseason.  The talk from prior to the game and even more so following the lackluster loss, was the lack of power play prowess that continues to snakebite the Jets.  Winnipeg is clicking at 14.3% this season which ties them with Nashville for 23rd in the NHL.  Not good enough if you want to compete with the elite teams in the East.


Winnipeg Free Press:  Laughter the best medicine for Noel.  The woeful Jets PP must be causing coach Noel and special teams coach Perry Pearn fits as they attempt to get this back on track.  We will have more on the Jets PP woes later this afternoon.

Winnipeg Free Press: So much for win streak.  These Jets are not the Chicago Blackhawks so you knew the streak would end eventually but I suspect many thought it would end in closer fashion.  Perhaps a 2-1 loss with the second goal coming late in the 3rd versus a 3-0 loss.

Winnipeg Free Press:  Wheeler shakes off pain, Jets breathe sigh of relief.  Watching the winger writhe in pain on the ice after taking a slap shot to the leg, the 15,004 assembled fans in the MTS Centre held their breath and the goal the Caps scored with Wheeler down seemed trivial.  He later tested the leg out and almost immediately went back to the bench which didn’t look good for business.  However he returned to play much to the relief of Jets fans who know this team can ill afford to lose him. 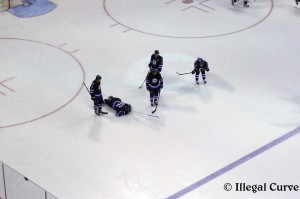 Winnipeg Free Press:  Bellicose Bogo won’t take guff.  After the big (but clean) hit int he corner, you got the sense that Perreault was going to retaliate in some fashion.  Of course as they were skating back to the bench he gave Bogosian a slash to the back of the leg, which was reciprocated with fists.

CBC:  Shortcomings too much against the Capitals.  When the Jets won five of six (surprising many), you had that feeling that one bad loss could cause mass hysteria.  While the special teams play needs to vastly improve, this team is still in the thick of things and a good road trip, three against Southeast division rivals, can go a long way to making people forget yesterday’s dud.

Winnipeg Sun:  No power in the power play.  The talk of the town is the Jets inability to score on the PP.

Winnipeg Sun:  Jets give us that sinking feeling again.  It was what it was, which in this case was a let down.  Despite taking the majority of shots the quality of same left a lot to be desired.  It was just one of those games and unfortunately, one the Jets will have to forget quickly as they head to Florida to take on the Panthers twice (Tuesday & Friday) and the Bolts once (Thursday) in the next week.

Winnipeg Sun:  Winkler’s Fehr makes Capital gain on Jets.  You could tell that this win was special for the former member of the Jets.

TSN:  Streaky Jets come up empty against Capitals.  It just felt like one of those games.  Similar to the 1-0 loss that the Jets suffered to the Capitals last season when Ovechkin scored with just over a minute to go in the 3rd.  Time to start a new streak in Del Boca Vista Phase III. 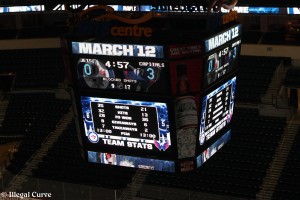 Jets on a Deadline: Game recaps, post-game audio, video highlights and the NHL.com 3 Stars of the night.

TSN:  Jones makes 37 saves, Monarchs down IceCaps.  St. John’s continue to struggle as they drop their second in as many nights to the Monarchs.

Video of the Night:

It was the 20th Anniversary (yesterday) of Teemu shattering Mike Bossy’s record and NHL.com features some of the goals from that record breaking season.