Note:  Tune into the Illegal Curve Hockey Show on TSN Radio 1290 as the guys discuss all the latest Winnipeg Jets and NHL news from 6 am to 9 am today.  Guest:  Anthony SanFilippo (PhiladelphiaFlyers.com)

Note II:  Make sure to @ tweet @illegalcurve with your guess in this afternoon’s contest.  You can win IC Gear by participating in our twitter Game Winning Goal contest. Remember that for your vote to qualify you must send in your guess by hashtaging (#) the Game Winning Goal (GWG) contest. (i.e. #ICGWG Thorburn).

Winnipeg Free Press:  D-man Melchiori makes frantic trip.  Similar to the call that back-up netminder Eddie Pasquale received when Al Montoya went down, the young defeceman got a late night call from his coach and is ready for the chance to show his stuff at the NHL level.

Winnipeg Free Press:  Show must go on in Philly.  Could this be the biggest test of the year for the Jets?

Winnipeg Free Press:  Miracle on ice.  Showing their is no ‘I’ in team, a collective Jets group from the players to the training staff worked together to save a fellow teammate’s life.

Winnipeg Sun:  Showing more than enough heart.  Every time the talk turns positive after the team rips off a win or two the wheels seem to come off the wagon.  Perhaps it is best to not get too high or too low.  Historically the Jets/Thrashers franchise has done very well in the city of brotherly love having not lost since January 21st, 2009.  That night Mike Knuble, who is freshly returned to the present day Flyers, scored two goals and Chris Thorburn scored for Atlanta.  Maybe he will pop the #ICGWG today. 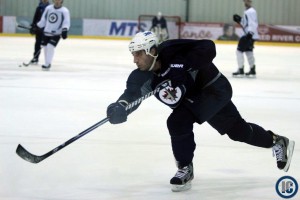 Winnipeg Sun:  Penalty killing shows marked improvement.  While the Jets have improved on the road killing six of six penalties, they did so against weaker power plays as Buffalo is ranked 29th and Carolina is 20th.  The Flyers are ranked 11th so the key will be not taking any penalties against a good power play unit.

Winnipeg Sun:  Redmond likely done for the season.  His season might be done, which is unfortunate given that the young defenceman was attempting to take his game to the next level, but the truth is that hockey is a game and the more important thing is he has his life.

Flyers official site:  Sesito injured on conditioning assignment.  Another injury for Philly.  Anthony will be joining the guys to talk about all things Flyers today.

Daily News:  Flyers just not very good.  If Jets players are worried about negativity in the media they should hang out in Philadelphia for awhile.

Daily News:  Matt Read lost 6 weeks with rib injury.  While you never like to see a player injured Jets fans won’t cry not seeing Matt Read in the lineup.  He was very good against Winnipeg last season.

Chicago Tribune:  Hawks make NHL history.  What more can be said about this Chicago team?  Regardless of how you expected them to do this season, you cannot believe anyone thought in their wildest dreams that they could achieve this level of success.

Ottawa Citizen:  Karlsson calls out Cooke, but stresses the positives.  Good on the young defenceman for trying to maintain positivity which cannot be easy knowing your season is already over.

Edmonton Journal:  Hall’s hit sends a message – Stop messing with us.  This sentiment seems to be exclusively one possessed by those with an Edmonton postal code.

Newsday:  Islanders place goalie Rick DiPietro on waivers.  Looks like the DiPietro experiment has finally come to its inevitable conclusion on Long Island.