Note:  Make sure to @ tweet @illegalcurve with your guess in this afternoon’s contest.  You can win IC Gear by participating in our twitter Game Winning Goal contest. Remember that for your vote to qualify you must send in your guess by hashtaging (#) the Game Winning Goal (GWG) contest. (i.e. #ICGWG Hainsey).

– Antti Miettinen has been removed from injured reserve on Jets site.  Might be in lineup today.

Winnipeg Free Press:  Two minutes for being so very stupid.  When you have the 30th ranked penalty kill in the NHL (by a country mile – Jets are killing at 67.9% and the 29th ranked Ducks are 74.1%) you simply cannot afford to take penalties.  It is really as simple as that.  Sure some are inadvertent but there are some (i.e. Kane’s extra minor vs. Hartnell, Slater’s faceoff violation and Jokinen taking a too many men) that you cannot simply afford to take if you plan on winning the game.

Winnipeg Sun:  Olli Jokinen makes serious improvement.  He is showing improvement and the Jets will need him to be even better if they want to compete against the better teams in the East.  They cannot afford another round of inconsistent play. 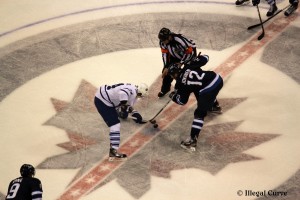 Winnipeg Sun:  Nothing special about Winnipeg Jets special teams.  While folks were trumpeting about the vast improvement in the penalty kill as the Jets went six for six against the Sabres and Hurricanes power play, are ranked low 30th and 20th respectively.  Whereas the Flyers have the ninth ranked power play and they used that to their benefit on Saturday going three for six.  Ted also looks at the Jets quick starts, play of James Wright and Postma’s soft play.

Illegal Curve:  Proposed Realignment puts Winnipeg Jets in Conference 3.  The big talk on Saturday was the new alignment of the NHL proposed for next season.  What do you think about the look of the Jets proposed conference?

IceCaps official site:  IceCaps at Marlies preview.  St. John’s has been off since a 5-1 victory on Wednesday.  Hopefully the time off has gotten them ready for their tilt with Toronto.

Columbus Dispatch:  Michigan takes out Miami Ohio and Jacob Trouba was stellar.  The Jets have to feel a lot of joy when they watch the defensive play of Jacob Trouba.  I caught part of the game and from what I saw he played very well.

Star-Ledger:  In the Devils’ system – Do the players actually matter?  This has been the knock on the Devils for years, yet they win championships, so you would suspect that many wish they too had as successful a system.

CBC:  Max Pacioretty takes out Ryan McDonagh.  When coach John Tortorella starts off a post-game press conference with a question for the gathered media you know you are in for a treat.  The Rangers bench boss was less than pleased with the hit that took out his player.  What do you think?

Globe and Mail:  Battle of Ontario finally has some bite.  Watching the game with a couple of the guys and it was noted how into the game the crowd was yesterday.  It had a playoff atmosphere.

San Jose Mercury News:  Sharks’ Ryane Clowe could be facing 10-game suspension by NHL.  The Sharks are going to present this as if Clowe was part of a line change.  Will be interesting to see how the league views it.

Buffalo News:  Sabres have pathetic repeat.  Certainly not all sunshine and lollipops in Northern New York state as the Sabres misery continues.  Last night they listened to more booing from their fan base as they dropped a game to in-state rival and fellow cellar dweller New York Islanders.