Note:  As always be sure to stay tuned to the @illegalcurve twitter account which will be bringing you all the latest from Jets practice today at the MTS Centre this morning.

Winnipeg Free Press:  Jets in recovery mode.  It is like that Chumbawamba song, the Jets got knocked down but now they are gonna have to get back up again.

Winnipeg Free Press:  Penalty-kill unit sending out an SOS.  While the Jets won’t use this as an excuse being without two heavies as coach Noel would call them in Byfuglien and Bogosian doesn’t make the business of killing penalties a very easy prospect.

Winnipeg Free Press:  Scheifele’s fate anyone’s guess.  While the Jets may not be voicing their intent, their actions appear to speak louder than anything coach Noel has said during a presser.  Would be shocked to see him past the next game he plays.

Winnipeg Sun:  Scheifele has extra pep in his step.  Scheifele has to be wondering if the game against the Panthers on Tuesday will be his last in the NHL for the 2013 season.  It would appear that he will be sent back to Barrie following his next game.

Winnipeg Sun:  Stuart is all hockey player.  An in-depth look at the Jets rugged defenceman and some of the things that make him tick. 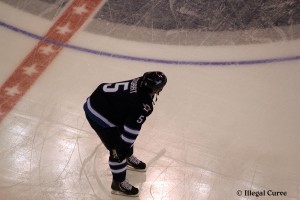 Winnipeg Sun:  Team need a boost after disastrous road trip.  It was a road trip to forget.  After many declared the Jets road warriors when they beat Washington and lost of Boston in a shootout during the first road excursion, there was a collective shock when the Jets went o for 3 on the most recent road trip.  The numbers were atrocious and coach Noel and his fellow assistant coaches are going to have their work cut out for themselves over the next couple of days.

The Telegram:  Pasquale, O’Dell lead IceCaps to 1-0 win over Binghamton.  Don’t look now but the Jets farm team may be turning things around.  They enjoyed their first 2 game sweep of the season at Mile One Centre, as they swept the Senators on the strength of Eddie Pasquale’s netminding.

Star Phoenix:  Blades win fourth straight.  Two Jets prospects went to battle last night as 2011 3rd round pick Adam Lowry and his Swift Current Broncos took on and lost to 2012 2nd round pick Lukas Sutter and his Saskatoon Blades 4-1.  The Blades held Lowry off the scoreboard and he finished the night -3.  Sutter was named Blades player of the month for January after recording eight goals and 30 penalty minutes in 11 games.

CBC:  Hotstove Tonight.  The panel talked about the goalie situation in Vancouver and ongoing drama in the Coyotes search for ownership.

Toronto Sun:  Short season an evaluation nightmare.  It is why 3 game losing streaks are a lot more significant than if this was the regular season.  Of course since only a few teams are overachieving, the hope for the teams currently on the bottom of the pile, is that they still have time to catch up.

NHL.com:  Lebron’s first NHL game (video).  King James took in the action between the Bruins and Leafs.  Considering his history with the Celtics, you would have to think he was cheering for Toronto. 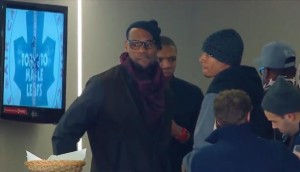 Washington Post:  John Erskine suspended three games for elbowing.  It was a pretty vicious hit that he threw on the Flyers Wayne Simmonds.