Note: We will be covering the Jets at training camp all week long. For all the latest news be sure to follow us on twitter @illegalcurve.

SI.com:  Monday Morning Quarterback.  On page 4 of Peter King’s regular column he detailed how his Jets wear was not well received in Atlanta:


“We should be arriving in 15 minutes,” the pilot said on approach to the Atlanta airport. “Temperature in Atlanta is 63 degrees.” … In the span of one evening and a morning in the air, I’ve gone from five layers in Denver to my Winnipeg Jets polo walking into the Georgia Dome. Stupidly, of course. Put the darn thing on Sunday morning forgetting that the Atlanta Thrashers turned into the Winnipeg Jets, and a couple of media folks gave a look like, “You couldn’t have worn something a little less offensive here today?”

Winnipeg Free Press:  Antropov missing practice over minor upper-body injury.  The line juggling continues as Nik was out of the lineup for a 2nd straight day.

Winnipeg Free Press:  Claude’s court back in session.  It was all laughs and smiles yesterday but we shall see how the mood holds after a few regular season games.

Winnipeg Free Press:  So, with further fan fare.  As was discussed all throughout the lockout, it is not a surprise that with the return of the Jets, the fans of Winnipeg returned in full force.

Winnipeg Free Press:  Hoping small changes make big difference.  One of the advantages for the Jets in a shortened NHL season is the relatively low turnover in personnel.

Winnipeg Sun:  Lowdown on the Jets’ 2013 schedule.  Kirk takes a look and gives you the skinny on the complete Jets schedule.  As fans start to do their season ticket drafting, it is a good idea to have some information on the 24 Jets home games.  Very interesting to see how some ticket drafts are done.  My brother told me that the home opener didn’t go until the 3rd round of selecting in his ticket draft. 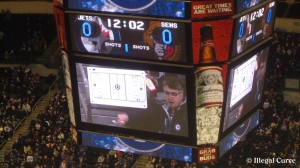 Winnipeg Sun:  Antropov could start season on injured list.  As we looked down from the press box yesterday we noticed that #80 was missing from the ice.  He skated following the open practice with Zach Bogosian and ultimately coach Noel revealed that he had failed the team physical due to an upper body ailment.

Winnipeg Sun:  Scheifele displays flair.  He still has his weaknesses but as he develops more strength and works on his skating, he will hopefully minimize these and they will be offset by his sure hands and excellent passing.  He made some moves yesterday that had the 5000+ fans at MTS Centre ‘oohing and ahing’.

Winnipeg Sun:  Fans in a forgiving mood.  It was an opportunity for people to get into the building and perhaps for some, see the Jets for the only time this season.  So it was unsurprising that 5000+ crammed into the MTS Centre on very short notice.   In fact as you can see below, fans were lined up over an hour before practice to get into the building.  About the only kink in the day was protestors from the ‘Idle no more’ movement protested with signs and drums.  Problem was many thought the drums were just enthusiastic fans.

Winnipeg Sun:  Fast pace won’t bother Ponikarovsky.  Many options for coach Noel in how he chooses to use Ponikarovsky.  He could throw him on the Eastern Euro line with Burmistrov and Antropov.  Could also play with Wellwood, who he knows from his Toronto days.

Winnipeg Sun:  Noel won’t overwork Pavelec.  The coach would not commit to a number.  When asked if Pavelec would again shoulder the load like he did last season, all coach Noel would say is that the starts will be based on performance.  He appears to have confidence in Jets backup Al Montoya as well.

Illegal Curve:  Open practice.  The Jets held their open practice yesterday and we have some pictures, video of the players giving away signed hats at the end of the practice and some audio from Blake Wheeler.

The Telegram:  IceCaps end home-ice losing streak by beating Marlies.  Putting an end to an ugly losing streak at Mile One Centre, the IceCaps will now have some time off before they head off to Norfolk to take on the Eastern Conference basement dwelling Admirals.

Swift Current Broncos official site:  Adam Lowry runs streak to 20 games.  Missed this in yesterday’s papers.  Saturday night the Broncos won their 4th game in a row and Jets prospect Adam Lowry extended his scoring streak to 20 games with a goal and an assist in the game.

Globe and Mail:  Canadian clubs to endure quirky schedule.  The Jets will have a fair bit of distance to travel but it turns out not to be as bad as some other clubs.  Dirk Hoag, a blogger who covers the Nashville Predators on his site ‘On the Forecheck’ does a super schedule every year wherein he calculates all the miles a team will travel.  While the Jets have the most distance to travel in the East, not surprisingly it is the Western Conference teams who will be collecting the most air miles.

Globe and Mail:  Play for sizzle or for future?  Many NHL general managers will be forced to make the decision as to whether they want to make an impact now or continue to develop their prospects for the long term.  Popular thinking for the Jets is that Scheifele will be given a chance but is likely headed back to Barrie unless he forces Winnipeg to keep him with the club.

Globe and Mail:  Hurricanes acquire key lockout negotiator Westgarth.  It was the first trade of the 2013 season and while it briefly created a buzz, it is not quite the blockbuster that many are expecting.

Part 1:  Intro, Eric Fehr signs with Washington, implications of a shortened season.  Impact of the new CBA on the Winnipeg Jets.  Brian Burke fired by Toronto.  RFAs that remain unsigned.