Global Winnipeg:  Ondrej Pavelec ready for compressed schedule.  We had a chance to catch up with the Jets goalie tandem today following practice and both guys are ready for the season to start.  To listen click here.

Illegal Curve:  Coach Noel Press conference.  Update on Miettinen (upper body injury).  Type of practice tomorrow.  Antropov status.  Getting team to play ‘A’ games.  Taking penalty phase.  Looking forward to day he can have a regular training camp.  Pressure of the 1st game.  Additions to the roster.  Slater’s versatility and reliability.  IceCaps players on team.  Addition of John Phelan to the Jets as a mental skills coach.

Winnipeg Sun:  Antti Miettinen lost indefinitely.  Nobody I spoke with remembered anything happening at practice yesterday that may have caused an injury but regardless, the Finnish winger will be out of the lineup for the home opener against Ottawa.

Winnipeg Free Press:  Smart move is to send Scheifele back.  A lockout shortened season might have the Jets brass inclined to keep the 2011 first round pick up with the big club as they try and compete for a playoff spot.  However the long term development of Scheifele as a player might benefit from more time under coach Dale Hawerchuk in Barrie.

Winnipeg Free Press:  Father knows best.  Jets fans should make sure they buy him a beer when he is in town then since Wheeler really turned it on last year.

Winnipeg Free Press:  Training camp notebook.  If you cannot be at training camp, why not read the notes of someone who is.

Globe and Mail:  Jets hope raucous home crowd and new centre will propel them into the playoffs.  Perhaps the adrenalin that the MTS Centre crowd provides can see the Jets again have success at home, but what will really establish if this is a playoff team is the team’s road record.

Winnipeg Sun:  Ticket system has fans up in arms.  The overall sentiment on twitter seemed to be outrage.   Personally I know that I prefer a physical ticket to have as a memento but that is just me.  The Jets have a 9:30 am press conference to address this issue.  Stay tuned to @illegalcurve as we will bring you all the latest on this subject. 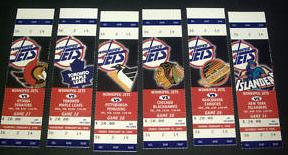 Winnipeg Sun:  Don’t read much into Scheifele’s shifting.  This early into training camp lines are still being juggled so it is a bit too quick to think that the Jets center of the future will be thrust onto a checking line.  Especially since Jim Slater is a natural center and would force Scheifele to shift to right wing.

Winnipeg Sun:  Burmistrov seasoned and ready for season.  The Jets have to hope that the young gun can have a bounce back season after the disappointment of last year.  While he didn’t exactly tear up the AHL this year (2 goals, 9 assists and a -2 in 22 games) he looks healthy and ready to contribute to the Jets.

Winnipeg Sun:  Stuart ready for more responsibility.  He is a fan favourite for his hard nosed style and the Jets are going to rely on him defensively as the injury to Zach Bogosian has everyone on defence having to step up their game. 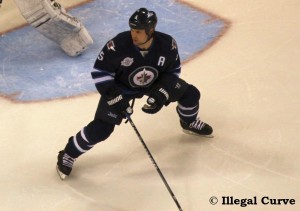 Winnipeg Sun:  Olli Jokinen happy with potential linemates Kane and Wellwood.  This has the potential to be a very good line for the Jets.  With Wellwood feeding these guys the puck, it could make for a lot of shots on net, and if you are a Jets fan, lots of goals.

CBC:  Ready for the NHL.  They profile young prospects from the various Canadian teams and when it comes to the Jets, they look at whether or not Mark Scheifele is ready to make the jump.

Edmonton Journal:  Oilers trade for defenceman Fistric.  The Oilers added a local Edmonton product in the trade.  They have a banged up defence corps so this move should help.

Globe and Mail:  NHL will know soon enough how much damage the lockout caused.  The southern U.S. teams are going to have to get creative as they attempt to resuscitate  the sport in these markets.

Globe and Mail:  NHLPA asks if Gomez deal is copacetic.  What a bizarre world we live in.  Being paid millions of dollars NOT to play hockey.  Only in the NHL.

TSN:  Crosby tops NHL on TSN’s Top 50 list for third straight year.  No Jets on the list.  Fair or foul?

Globe and Mail:  KHL flexes its muscle as NHL appears greedy and arrogant in comparison.  The NHL acting with hubris!!  I am just shocked.  Would have been quite interesting to see what would have happened if Kovalchuk or Datsyuk would have chosen to stay in the KHL.

New York Post:  Visnovsky misses Islanders deadline, could be suspended.  Speaking of the KHL, it appears to Visnovsky this was more tempting than playing on Long Island.