Winnipeg Free Press:  Jets take to the ice at MTS Centre.  It was a full house at the MTS Centre this afternoon.  Only guys missing were Nik Antropov, Alex Ponikarovsky, Evander Kane and Kyle Wellwood.

Global Winnipeg:  Winnipeg Jets governor Mark Chipman says the new NHL contract should make his team more profitable.  He spoke with the media for about 15 minutes this morning.

Winnipeg Free Press:  Memos from the boss.  Gary had an exclusive 1 on 1 with the Jets Mark Chipman.  Fans will be interested to hear what he had to say.

Winnipeg Free Press:  Chipman wants to recognize local fans.  Well said by the Jets co-owner:  “But yeah, we’re kicking some ideas around. We don’t want it to be patronizing. I’d rather do nothing than have it come off as some hollow effort to appease people that are still angry. We have to come up with the right thing to do.” 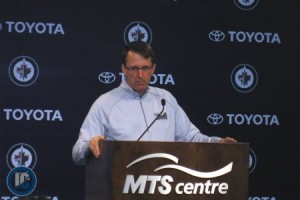 Winnipeg Free Press:  FAQ-thurs.  An update for those who still have questions about what is happening and when you might start getting some Jets news.

Winnipeg Free Press:  Hainsey eager to get back to playing.  I thought his interview yesterday was the most interesting audio that has been done this week.

Winnipeg Sun:  Andrew Ladd jokingly calls out Evander Kane.  Jokingly he sent a tweet at the Jets young star to get to Winnipeg so the team can get ready for the compressed schedule.  Any additional time the team can practice together will help as they get ready for the mini-training camp which will begin on Sunday.

Winnipeg Sun:  Chevy wants small, competitive training camp.  This will be a strange camp to say the least.

Winnipeg Sun:  Dustin Byfuglien ready to ‘go to work’.  You get the feeling that these players are eager to get on the ice and to be able to discuss hockey related questions.  While Buff isn’t the most engaging with the media, you can bet that he would rather be pestered by a question about the Jets power play than something CBA related.

Winnipeg Sun:  Ondrej Pavelec comes clean.  He made a poor decision.  The good news he showed an understanding that his actions were wrong and a willingness to discuss this with the media.  It cannot be easy to have to take it on the chin but that is what he did when he met with the media and was peppered with questions about the incident.  What would be nice is to see Pavelec turn this into a positive by getting involved with a cause that explains to young people the problems with drinking and driving.

Winnipeg Sun:  Montoya likes fit with Jets.  The Jets newest backup said all the right things yesterday.  His attitude towards the city is excellent and he will be a very nice addition to this team. 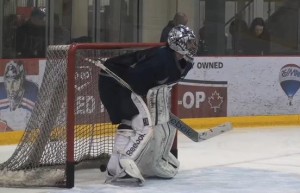 Illegal Curve:  Player audio from the IcePlex.  The most recent Jets to skate at the Iceplex and speak with the media were Ron Hainsey, Dustin Byfuglien and Al Montoya.  The Hainsey audio is especially interesting.

Illegal Curve:  Ondrej Pavelec audio from the IcePlex.  While he didn’t practice he came down to the IcePlex to take his lumps off the ice as the media peppered him with questions about his DUI.  As I said above he took the questions and gave pretty forthright answers.

The Telegram:  A half-dozen IceCaps pegged for Jets’ camp.  What a thing to experience mid way through your season.  It is one thing to lose a player or two to injury, but to lose 6 players to the parent club, even if it just lasts for the training camp has got to be tough to handle.  The IceCaps have a game this Saturday and then the team is off until Friday the 18th so they might be able to weather this storm.

Reporter Herald:  Colorado Eagles silence Stockton Thunder.  The Jets ECHL team unleashed 8 goals on the Thunder in the victory.  Perhaps they could share that scoring with the AHL IceCaps.

Globe and Mail:  Commissioner Gary Bettman apologizes to fans for lockout.  The apology by commissioner Bettman should be taken at face value but fans need to see what the NHL offers to truly show the value in which they are viewed.  If it becomes business as usual or they go from offering a 15% discount  to a 20% discount on merchandise, then fans will know the depth of the apology.  Tangible efforts are required to repair the damage done.

ESPN:  BOG’s grumblings not sign Bettman is out.  The vote ended up 30-0 in favour of ratifying the deal so clearly Bettman won the day.  Sounds like in 8-10 years the BOG might want things done differently but that is years away…isn’t it?

CBC:  Brian Burke firing was personal.  The firing caught the hockey world by storm as twitter blew up with the news yesterday.  Speculation abounded as to the reasons and rumours are still filtering out of Toronto as to why he was given the heave-ho.

National Post:  Expect new Leafs GM Dave Nonis to be more patient than predecessor.  Nonis is like the Kenny Bania of the NHL.  Always seems to be following behind Burke’s lead.  And just like he was able to do in Vancouver, he will be given a chance to turn things into ‘Gold Jerry Gold‘ in Toronto.

CBC:  European stats leaders during the lockout.  The Oilers are going to be the team I want to watch in the West this year.  Their young guns have been very successful during the lockout and should prove worth the price of admission.