Globe and Mail:  Hainsey, Pavelec and Byfuglien join Jets in Winnipeg as season nears.  All three had a lot to say today from the IcePlex.

Winnipeg Free Press:  Playful Byfuglien deflects conditioning questions.  Buff was in rare form with media as he played along with the many questions about his fitness level.

Winnipeg Free Press:  Jets’ goalie remorseful after DUI.  Give Pavelec credit.  He met with media even though he wasn’t participating in the skate to clear the air.  He was apologetic for his actions.  Is that sufficient?  You can hear the audio here.

CBC:  2013 Jets season preview.  Key is whether this young group can continue to grow together and will have enough lasting power for the short sprint to the playoffs.

Winnipeg Free Press:  Noel must transform Jets from pushovers into mature pros.  You can bet that coach Noel hasn’t been sitting idle during the lockout and I’m sure he has quite the game plan in place for when he has access to his troops. 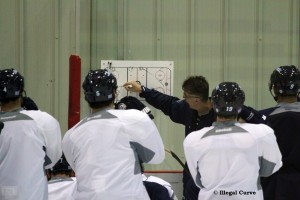 Winnipeg Free Press:  The wild-card round.  Tim looks at the top 5 wild-cards of training camp.  It is going to be condensed so make sure you stay tuned next week because it is going to be busy.

Winnipeg Free Press:  Jets trickling into Winnipeg.   The Jets previously working out during CBA negotiations barely had enough for 2 on 2 drills.  In the next couple of days a steady influx of players will make the IcePlex practices significant.  Will other teams who have fuller rosters be at an advantage to start the season?

Winnipeg Free Press:  Jets to host Sens Jan. 19.  There was some talk of the Jets playing the Devils but now the game is back to the one that Winnipeg was originally scheduled to play on the 19th, although that game time was 9 pm and now it is a 1:30 pm start.  How do you feel about this match-up?  Which team would you have wanted to see if not Ottawa? 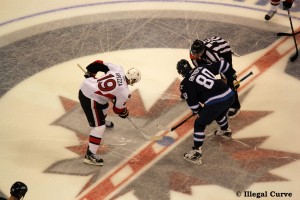 Winnipeg Free Press:  What’s on TV?  Hockey, of course.  All the providers must be salivating at finally being able to activate the Jets channel for their subscribers.

Winnipeg Sun:  Wheeler set to hit the ice flying.  I watched one of his games in the DEL and let me tell you, while it might not be even close to NHL level, Wheeler was flying around the ice.  If the Jets are going to make a post season run, he is going to have to have an even better year than he did last season.

Winnipeg Sun:  Jets have little time to find answers.  A lockout shortened season does not lend itself to soul searching at any point during the year.  To have any chance you need to get a quick start out of the gate and not look back.

Illegal Curve:  Player audio from the IcePlex.  Captain Andrew Ladd and Chris Thorburn return to the city and were swarmed by the media.

Illegal Curve:  Application of the Winnipeg Jets logo at MTS Centre.  It takes about 4 days to get the ice properly prepared for the start of the season.  The Jets logo was being applied and included some innovations, like the Jet in the red line. 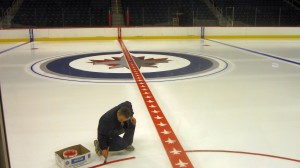 CBC:  IceCaps player, coach relieved lockout is over.  The good news for coach McCambridge is that his opponents will lose some of the high level NHL talent that has found its way to the AHL (see Oklahoma Barons roster) but it will also mean that a number of his top guys will be called back to the parent club.

CBC:  Owners gather to vote on labour deal.  This should be a slam dunk.  While there has been speculation that not all owners are pleased with this deal, the vote will be unanimous.

Toronto Star:  Agents scurry to find loopholes in latest.  It won’t be just agents that test the boundaries of the new rules.  As we saw during the last CBA, GMs also become quite creative within the system that becomes the NHL bible.

Globe and Mail:  Breaking down the new rules in proposed CBA.  While fans might find these details boring and tedious, they remain important pieces in understanding many different aspects of the off-ice game.

Globe and Mail:  How the NHL’s salary cap could hit 90 million.  Small market teams and those in large markets but with poor revenue might be a bit wary of the 2017-18 season.

Globe and Mail:  Training camps expected to open on Sunday.  As always stay glued to illegalcurve.com as we will be bringing you wall to wall coverage of every aspect of your Winnipeg Jets at training camp.  The best way to ensure you are up-to-date is to follow us on twitter @illegalcurve.

Globe and Mail:  Luongo saga churns onward as Schnider patiently waits.  Kudos for Roberto for showing a good sense of humour.  Yesterday he took to his other twitter account and tweeted this:

Globe and Mail:  KHL declares war on NHL contracts.  Ironic that these players are suggesting that the league should honour their contracts (when a rollback was being talked about during CBA negotiations) but would consider not honouring the contracts they currently have with their NHL teams.  Won’t know anything until NHL deal is ratified and the teams need players back for training camp.

CBC:  Injury report.  Taking a look at all the players currently unavailable to start the season.

USA Today:  Dallas Stars taunt Tony Romo, Cowboys after Twitter diss.  Totally harmless fun but I noticed this morning that the offending tweet by the Dallas Cowboys had been deleted.  Of course the Cowboys issued the standard twitter apology saying their tweet was “posted accidentally”.  I’m pretty sure you have to make a conscious decision to write something and then hit send.  Personally I like it when teams mix it up and show some personality.  Good for the Stars for not backing down.