CBA news: Marketing master must figure out how to regain NHL’s mojo. NHL and union finally realized they needed a season most of all. Fans want to know what’s in it for them. HNIC commentators gearing up for season. Will frustrated sponsors warm up to hockey again?

NHL news: Parise and Suter finally hit the ice for Wild. Return of hockey could give arena deal ‘psychological’ push.

Winnipeg Free Press:  Jets to host Sens.  Gary Lawless of the Winnipeg Free Press just tweeted that the Jets will open the season against the Senators on Saturday, January 19th at 1:30 pm.  It was also be the first game in Canada to start the season.

TSN:  Captain Ladd says team can’t stumble out of gate.  I took a look at what teams made the playoffs in 1993-94 and then the following lockout shortened year and only 2 teams changed from the previous year.  (All the same Western Conference teams made it and only 2 Eastern Conference teams changed.  Mtrl/NYI were out and Que/Philly were in).  Now this might not occur this time around but the best bet for the Jets will be to come firing out of the gate from the start.

Winnipeg Free Press:   Thorburn believes winning key to getting fan base back.  Like a lot of players, Thorburn knows that this fan base wants to see a winner and that winning heals most wounds.  We will have to get his thoughts on how he feels knowing he won’t have 15,004 chanting GST every game.  Although I’m sure @icezzyg is working on his next nickname for a Slater, Thorburn and ____________ line. 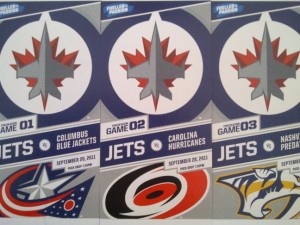 Winnipeg Free Press:  Jets’ website posting doesn’t cut it with fans.  Some fans did @tweet us saying they failed to notice the word ‘sorry’ anywhere within the message from the Jets (read that statement here).

Winnipeg Free Press:  New Jet Jokinen brings a little bit of Finland and a  lot of skill and leadership.  While he remained silent during the lockout, fans will be very happy to hear what he had to say yesterday, when he spoke with the media for over 20 minutes.

Winnipeg Sun:  Finnish sniper Jokinen now a leader.  At 34 he is one of the older players on this relatively young squad and his leadership will be needed as the team begins the spring to the playoffs.

Winnipeg Sun:  Teemu gave Jokinen good word on Winnipeg.  Even though Teemu has long since departed our city, the love affair continues and his good word probably helped the Jets being able to acquire his fellow Finn.  Talk like this will have fans giving Jokinen the key to the city. 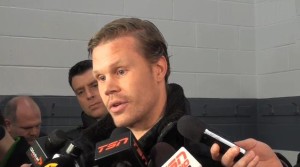 Winnipeg Sun:  No time to celebrate for Hainsey.  With all the time he has been spending in the boardrooms down in NYC, one might wonder what sort of time he has had to get into game shape.  Luckily for Hainsey, with the long breaks between negotiations we’re sure he likely found the time.

Winnipeg Sun:  Players expect ‘hockey crazy’ Jets fans.  I don’t think it will come as any surprise that fans in this city are going to go absolutely wild when their team steps on the MTS Centre ice for that first game.  You have to appreciate the pragmatism with which the players respond when asked if they expect boos from the crowd.

CBC:  Winnipeg fans, businesses rejoice at lockout deal.  The downtown should see quite the influx as 15,000+ head down for 24 or 25 home games during the season.

Global Winnipeg:  MTS Centre scrambling to prepare for return of the Jets.  The media will be down at the MTS Centre today to watch the application of the Jets logo on the ice at the rink.

Illegal Curve:  Player audio from the IcePlex.  Jim Slater, Bryan Little and Zach Bogosian offered up their thoughts on a wide variety of topics.

The Telegram:  IceCaps will need A-game from young D-man.  The end of the NHL lockout will provide some prospects in the AHL the chance to develop as they see some teammates head to the parent club and they get the chance to step up.

Northern Colorado 5:  Eagles Weekly Update.  Taking a look back at the week the Colorado Eagles had and what fans can expect from the Jets ECHL team in the week ahead.

Globe and Mail:  Marketing master must figure out how to regain NHL’s mojo.  I will be very interested to see what approach the league decides to take to regain the image they had prior to this lockout.

Globe and Mail:  NHL and union finally realized they needed a season most of all.  Former Habs goalie turned politician Ken Dryden offers his thoughts on what it took for both sides to get a deal done.  And he is likely right that in less than a decade, neither side will remember the lessons they should have learned from this lockout.

Globe and Mail:  Fans want to know what’s in it for them.  My guess, not much of anything.  It is interesting to read and hear fans reaction to the end of the lockout.  Some want an apology, others a discount, while still others say that they do not expect anything from the NHL.

CBC:  HNIC commentators gearing up for season.  And similarly fans from across this great nation are excited to turn on their televisions and watch some good old Hockey Night in Canada.

Toronto Star:  Will frustrated sponsors warm up to hockey again?  While some companies might be regretting their commitments to the league, the reality is that with a 10 year CBA and the labour peace it is expected to usher in, the NHL can now market themselves accordingly.

TSN:  Parise and Suter finally hit the ice for Wild.  For Minnesota fans it has to be very nice to see these two, not just on the ice together but to be wearing the Wild jerseys.  With the heavy spending of owner Craig Leipold, the State of Hockey has big expectations for this team.

Edmonton Journal:  Return of hockey could give arena deal ‘psychological’ push.  The pride in Oil country is quite high these days.  They are positively glowing at the prospects who have been ripping up the AHL with Oklahoma.  The last feather in the cap will be to finally get this arena deal done.