Winnipeg Jets news: Olli Jokinen said he’d talk when lockout was over. Zach Bogosian re-joins teammates, but won’t play yet. Practice free of tension. Jets aim to bring playoff hockey back to Winnipeg. Reintroducing your Winnipeg Jets. Snooze button no longer an option for Jets’ Slater. It’s your move, Jets fans. Zach’s status and other essential information. Fans are ready to forgive NHL for lockout. MTS Centre staff, downtown eateries are … let’s just say excited about end of NHL lockout. Stuart ready to start. Jets must meet raised expectations in return from NHL lockout. What will the Winnipeg Jets look like when they hit the ice? End of lockout a “late Christmas present” says Kane. Scheifele will be at Jets training camp.

CBA news: Shortened season will be ‘terrific’ says Don Cherry. Bill Daly says 48-game NHL season seems ‘more and more’ likely. How shortened NHL season could work. Why a 50-game NHL season won’t be too compressed. Who won what in the new CBA. Will hockey fans send message? The challenge now for the NHL moves to fixing a tarnished brand.
Last truncated NHL season in 1994-95 was ‘awesome’. Storylines to watch as NHL moves on from lockout. Both sides give ground to save the season.

Note:  Today is the first day of the post-lockout papers.  We need to take a moment to enjoy the relatively CBA free papers that will soon become a thing of the past.  I say relatively free because while the deal is still being ratified, we will still cover all the latest from New York, but happily our focus will continue to be on the team that you come here to follow, the Winnipeg Jets.  Here are some of the many ways in which you can stay up-to-date.

Winnipeg Sun:  Olli Jokinen said he’d talk when lockout was over.  And boy did he talk.  Met with reporters for over 20 minutes.  This is just a short blurb and I suspect we will be reading more from this interview.

Winnipeg Sun:  Zach Bogosian re-joins teammates, but won’t play yet.  Perhaps rehabbing with his fellow Winnipeg Jets around will help speed the healing process for the Jets blueliner.

Winnipeg Free Press:  Practice free of tension.  Players actually are able to relax and not have to answer the same CBA questions they have already been asked repeatedly for months.  If you want to hear from some of the Jets who were practicing at the IcePlex, we have audio from Bryan Little, Jim Slater and Zach Bogosian we have it here.

Globe and Mail:  Jets aim to bring playoff hockey back to Winnipeg.  Anything can happen in a shortened season and folks in Winnipeg would be ecstatic to see their team in the top 8 of the East.  Although popular sports betting site Bodog.ca has the Jets at 50-1 (worst among Canadian teams and 3rd worst in the league, just ahead of Columbus Blue Jackets and the New York Islanders).  You are welcome to submit your thoughts on where the Jets will finish in our pre-season prediction poll.

Winnipeg Free Press:  Reintroducing your Winnipeg Jets.  It is understandable if you’ve forgotten who exactly plays on this team. Ed gives you a heads up.

Winnipeg Free Press:  Snooze button no longer an option for Jets’ Slater.  While he might not have as much time for his ‘Take Jim Slater to work’ days, the central member of last season’s GST line is an extremely important piece for the Jets moving forward.  He is healthy and eager to get started on this season which should have Jets fans very pumped. 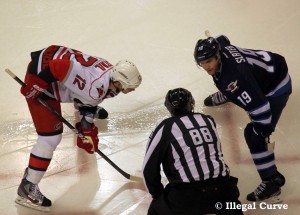 Winnipeg Free Press:  It’s your move, Jets fans.  The greatest reward that TNSE can do for their fans is to ensure that this team is not only entertaining to watch but competitive and able to challenge for a top spot in the next few years.

Winnipeg Free Press:  Zach’s status and other essential information.  Ed answers some essential questions for Jets fans.  One positive of this lockout is that Zach Bogosian who was expected to be sidelined by injury for 4-6 months has now had time to heal and might simply be unavailable for just a short period of time.  If this team plans to challenge for the playoffs during this shortened season, that is important.

Winnipeg Free Press:   He’ll be ready when he’s ready.  Slow and proper development is the only way to go.  We have seen the disaster that can result when you try and rush your prospects to the NHL too quickly.  As Gary has been saying for awhile and which was  further confirmed by Tim, the Jets will bring the 2011 first round choice back to camp instead of sending him to his OHL squad.

Winnipeg Sun:  Fans are ready to forgive NHL for lockout.    If one city will likely see zero impact as a result of this lockout it is Winnipeg.  Just entering the 2nd year back in the NHL, fans have been waiting too long for professional hockey to bother to demonstrate any signs of fan displeasure.  Additionally, many fans don’t feel that this lockout was the desire of TNSE, another reason they are unlikely to boycott. 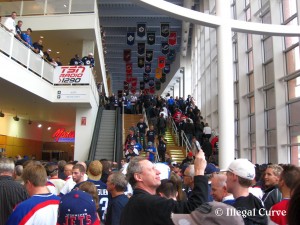 Winnipeg Sun:  MTS Centre staff, downtown eateries are … let’s just say excited about end of NHL lockout.  While these are the people who will never be ‘made whole’ it is nice for many to just get the opportunity to start earning a wage now that the NHL will be returning to downtown Winnipeg.

Winnipeg Sun:  Stuart ready to start.  The Jets stay at home defenceman was caught on a bus in South Carolina with his ECHL teammates, but quickly boarded a plane to return to the Peg’.  Stuart joined the Florida Everblades about 3 weeks ago.

National Post:  Jets must meet raised expectations in return from NHL lockout.  Winnipeg fans are too sophisticated to simply be satisfied with the fact that the team has returned.  Is this team a playoff team?  Perhaps not, but fans are going to want to see the best they have to give during this shortened season.

Winnipeg Sun: What will the Winnipeg Jets look like when they hit the ice?  Still so many questions remain as we get ready to enter a condensed training camp.  As always stick to @illegalcurve for the latest news from twitter.

CBC:  Shortened season will be ‘terrific’ says Don Cherry.  Watching a sprint is usually more fulfilling than a full marathon and that is what we are about to see occur in the NHL this year.

Globe and Mail:  Bill Daly says 48-game season seems ‘more and more’ likely.  While it would be economically beneficial to play 2 more games for everyone involved, logistically it seems highly unlikely that it can happen.

CBC:  How shortened season could work.   Elliotte Friedman is always a great read.  Includes a brief point about Jets prospect Trouba in the article (thought 19).

Globe and Mail:  Why a 50-game season won’t be too compressed.  Count me in as someone who will be happy to have another couple of games added to the schedule.  It is also the easiest in terms of scheduled as we discussed on air yesterday.  5 games against your 4 division rivals for a total of total of 20 games and 3 games against the other 10 teams in conference for a total of 30 which equals 50 games.

Globe and Mail:  Who won what in the new CBA.  Heaven forbid we don’t categorize things in a win or loss column.  Anyways, according to Shoalts the owners were victorious in more of the pieces to this puzzle.

Toronto Star:  Will hockey fans send message?  My guess is fans do not stay away in this city, however that will be quite different in some of the non-traditional markets who may have been struggling prior to this lockout.

Globe and Mail:   The challenge now for the NHL moves to fixing a tarnished brand.  I would start by buying the book “Fixing your image after a completely unnecessary lockout for dummies”.

Minneapolis Star-Tribune:  Biggest assist goes to federal mediator.  As Drew said yesterday on a special edition of our lockout coverage on TSN Radio 1290, add the name Scot Beckenbaugh to the list of contributors to hockey who arrive out of nowhere but have such a significant impact.

Globe and Mail:  Last truncated NHL season in 1994-95 was ‘awesome’.  According to Pierre LeBrun the “NHL sent out memo to teams tonight saying Jan 19 puck drop is most probable, however if ratification process goes fast, Jan 15 still in play,”.   What we know regardless of whether it is a 48 or 50 game season is that you cannot afford to fall out of contention early in the season or you can pretty much kiss the playoffs goodbye.

National Post:  Storylines to watch as NHL moves on from lockout.  Have to think where Luongo ends up is most intriguing storyline outlined.

Globe and Mail:  Both sides give ground to save the season.  The most important group, who keep the entire operation afloat, and are truly the ones saving the season are the fans.  Of course they are the ones completely taken for granted, although you can expect to hear the platitudes very soon.

FS Arizona:  Jamison ready to move forward with Coyotes.  Kudos have to be given to Jamison who worked hard to apparently get a deal done in Arizona.

Arizona Central:  NHL deal paves way for Phoenix Coyotes to finally begin season.  The cynic in me says it is curious that this information is being release at the same time of the CBA results, perhaps with the aim of burying it.