Winnipeg Free Press:  Lockout bickering casts pall over what we love about NHL.  Gary has looked at this lockout as to how it would impact Jets fans.  While there has been bitter grumblings from fans and courtesy of social media we hear and see this a lot louder than during the previous lockout, I still believe that by the time the 2013-14 season rolls around, this lockout will be long forgotten.  (presuming that the lockout ends in 2012-13 of course).

Winnipeg Free Press:  Obey or pay.  Pasquale has worked hard to establish himself with the Jets AHL affiliate.  While his team has not been particularly impressive, the young tender has some pretty decent stats aside from/despite the losing record.

Winnipeg Free Press:  Scheifele gets 2nd shot at gold.  You can expect the Jets top pick to showcase his talents more significantly that he did last year. 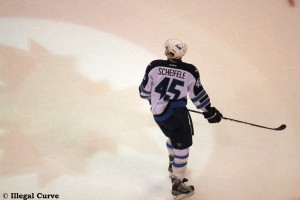 NHL.com:  Hawerchuk sees big things for star Scheifele at WJC.  The steady tutelage of Hawerchuk is going to pay dividends for the Jets in the years to come.

CBC:  Explaining the NHL’s latest move.  Elliotte Friedman, who will be joining the guys on the IC Hockey Show today, gives you the explanation as to why the league has done what they did.

Globe and Mail:  NHL files class-action suit against players’ union.  Wonder how long that suit has been hanging in the NHL’s closet.

ESPN:  Disclaimer vs. decertification.  The latest big of legalese if you are so inclined.

Globe and Mail:  Loss to Russia motivates Canada’s Strome.  Hopefully he uses that disappointment to power Team Canada to gold this year.