Note:  Every Friday we will be bringing you a update on the progress of the beards being grown by Drew & Ezra as they help support the Heart and Stroke Foundation of Manitoba in conjunction with the Festival du Voyageur in the 31st annual beard growing contest.  Last night was a kick off for the event in St. Boniface and both Ez and Drew received their official “final shave” for two months. 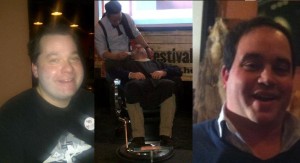 Winnipeg Sun:  Scheifele stoked for second shot at gold at World Juniors.  We know that he was disappointed in last year’s tournament, and he appears focused to be better this time around.

Winnipeg Free Press:  Jet knows just what Scheifele will face.  Jets captain Andrew Ladd talks about his experiences at the World Juniors and what the Jets 2011 1st round pick can expect.

Hockey’s Future:  Rebuild continues to go well for Winnipeg Jets.  A late addition to yesterday’s lineup, the assessment of the Jets talent pool is generally positive.  With 6 picks in the first 3 rounds in 2013, of what is regarded as a deep draft, the Jets are really going to have an opportunity to stock the cupboard. 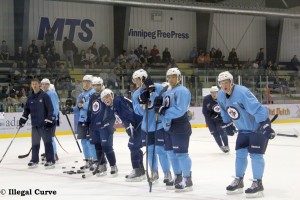 Northern Colorado 5:  Eagles Lose Kaunisto and Schnell To IceCaps.  Both players were having an impact in the ECHL and the IceCaps are hoping they can jump start the AHL squad who are mired in a winless December.

The Province:  Are they really stupid enough to let the NHL season die?  I also believe that we will see NHL hockey this season but both the NHL and the NHLPA are continuing to play one hell of a game of chicken.

Globe and Mail:  Stalled lockout talks put media in play as leaks surface.  The end seems near for this lockout.  If only common sense which is advocated by that anonymous NHL Governor, can win out.

USA Today:  Obama tells NHL, players to ‘do right by your fans’.  The President of the United States hits it on the head:

ESPN:  No progress in labor talks.  This is all show.  Neither wants to appear to be doing nothing, so instead they are doing nothing with the appearance of doing something.

Calgary Herald:  Who will be Team Canada’s captain?  The Jets Mark Scheifele would look good with the C on his chest but you have to guess that RNH will be the easy favourite to captain this team.

CBC:  Canadian world junior hockey roster announced.  If the lockout doesn’t impact the lineup many are picking Canada as the easy favourites in the Tournament.

Globe and Mail:  MacKinnon and Drouin survive final cuts to make Canadian junior team.  While it is unusual to have a couple of 17 year olds on the team it is not without precedent as Team Canada also had 2 back in 2008, a tournament that saw Canada win Gold.