CBA news: Bettman, NHL already appear to be winners on paper. Sides in NHL dispute need to push things to brink. Labour talks produce little to talk about. Will frustrated fans who vow to stay away be able to keep that promise? Hossa gets medical OK to play.

World Juniors: Team Canada makes first round of cuts. Being healthy scratch is good news for Canadian kids. Superstars who were cut early in their careers. Canadian junior squad loses exhibition to University of Alberta team.

Note:  We have barely wiped the Movember mustaches off our faces and it appears that a couple of members of the Illegal Curve team (@ICEzzyG and @ICdrew) just cannot stop growing facial hair for charity.  This time we will be supporting the Heart and Stroke Foundation of Manitoba in conjunction with the Festival du Voyageur in the 31st annual beard growing contest.  The Beard Growing Contest Kickoff Event for the clean-shaven category will take place tonight at Garage Cafe (166, Provencher Blvd.) from 5 pm to 8 pm. This event is open to the public. In order to register, you must be clean shaven.  Show up and support a great cause.

Hockey’s Future:  Rebuild continues to go well for Jets.  A look at the prospects in the Jets system.  Does this group instill you with confidence that they can help Winnipeg compete in the near future?

Winnipeg Sun:  Googling for news about the Winnipeg Jets? You aren’t alone.  Not a surprise that the Jets were in the Top 5 of teams in Canada searched.  Of course if you want to save your time, you would be better off perusing illegalcurve.com as we take the effort out of time consuming internet searches for the latest Jets news.  And to be doubly protected be sure you are following us on twitter @illegalcurve for all the latest Jets news updates.

National Post:  Mark Scheifele adjusts to life on the wing with Canada’s junior team.  Adding some versatility to his game can only help his later development in the NHL.  We know all too often what happens to one dimensional players.  Some conflicting news as to whether or not the Jets will allow Scheifele to stay with Team Canada if the lockout gets resolved.  According to TSN’s Bob McKenzie, no nhl teams have done so but CBC’s Tim Wharnsby tweeted that the Jets have committed Scheifele to the entire tournament.

Florida Everblades:  Jets Mark Stuart scores in 1st game back.  Mark Stuart the sniper?  Despite scoring just 3 goals in 80 NHL games last year he scored in his first ECHL game last night.  The first assist went to Aaron Bogosian, the older brother of Stuart’s usual defensive partner Zach Bogosian.  You might recall seeing the older Bogosian at the 1st Jets exhibition game when he was visiting the city as a member of the Columbus Blue Jackets organization. 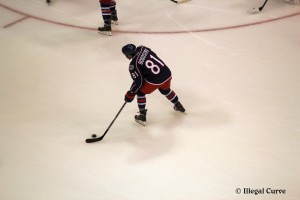 TSN:  Holtby strong again as Bears blank IceCaps.  Remember yesterday when I said the Caps hadn’t won in December and had lost 4 straight, well make that 5 as they lost again last night.  About the only positive is the fact that the IceCaps tied the Wilkes-Barre/Scranton Penguins for the 2nd longest sell-out streak in AHL history by selling out their 54th straight game.

Spectator Tribune: Where no fan has gone before. If you missed this yesterday, friend to illegalcurve, Constantine Gamvrelis (aka jetsxoxo) had his story told.  If you caught any of last week’s CBA insanity you probably came across his #blesstheJets hashtags from the hotel.  He was featured on radio and everyone in the Peg’ who wanted to get some New York insight followed along with him for his humorous tweeting.

ESPN:  Rest easy, we’ve got your new CBA right here.  It is at this point when we see the resolve of both sides and if they are willing to compromise to get this deal done.

CBC:  Bettman, NHL already appear to be winners on paper.  Even by ‘losing’ the players are still winners.  Reminds me of the Seinfeld with the woman yelling out the window “You’re all winners“.  But nothing is written in stone so the players could still pull some shenanigans.

CBC:  Sides in NHL dispute need to push things to brink.  Friedman is bang on as this process has been a colossal waste of time and even worse is the casual nature in which fans emotions are continuously being manipulated.  Both sides need to push past this useless process of mediation and either get a deal done or walk away from the 2012-13 season.

Globe and Mail:  Labour talks produce little to talk about.  So we are back to being depressed after a day of little progress.  My baboon heart really cannot take much more of this.

Globe and Mail:  Will frustrated fans who vow to stay away be able to keep that promise?  As I’ve said all along the answer is quite simple and it is a resounding NO!! (with a couple of emphatic Jake Jarmel exclamation points to boot).

Chicago Tribune:  Blackhawks’ Hossa gets medical OK to play.  It was a good news/bad news sort of day for the Hawks star.  He got medical clearance to resume play which is good news however it also means he is joining the rest of the union guys being locked out and will no longer be receiving his salary from Chicago.

CBC:  Messier, King, Henderson get Order of Hockey in Canada honours.  A worthy crop of individuals being inducted into this rather exclusive group.

TSN:  Team Canada makes first round of cuts.  Thirty-one players remain at camp and Team Canada’s head coach Steve Spott will have to get his roster down to 23 before they head to Russia.

Toronto Sun:  Being healthy scratch is good news for Canadian kids.  Best news these kids heard since the camp began as it essentially means they have made Team Canada.

Toronto Star:  Superstars who were cut early in their careers.  Some of the best learning opportunities are those times when we fail to achieve our goals.  It forces us to reevaluate our processes and take steps t ensure that we do not repeat the process again.

CBC:  Canadian junior squad loses exhibition to University of Alberta team.  Looks like nerves got the better of the young guns.