Spectator Tribune:  Where no fan has gone before.  Friend to illegalcurve Constantine Gamvrelis, aka jetsxoxo, has his story told.  If you caught any of last week’s CBA insanity you probably caught the #blesstheJets hashtags.  He was featured on radio and everyone in the Peg’ who wanted to get some New York insight followed along with him for his humorous tweeting.

Winnipeg Free Press:  Will the Jets be ready?  What will be the biggest key to a shortened season for the Jets?  It appears the conversation in the media is rapidly shifting to talk of game play.


Winnipeg Free Press:   No Jet running his mouth yet.  The Jets players have kept quiet and at this point in the process are certainly not going to cause any waves by saying much.

CBC:  Scheifele does right by Hawerchuk.  Once again the steady influence of the Jets 1.0 great is working miracles as he gets a chance to continue to help the Jets 2.0 first round selection in 2011 develop.  While nobody is happy about the lockout, the one benefit is the continued relationship between Hawerchuk and Scheifele. 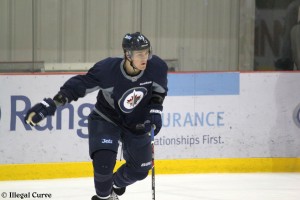 Winnipeg Free Press:  Ladd, Dennis Hull right on Target.  Smart move by the retail giant linking the passion for hockey with an opportunity to help sell their brand.

Winnipeg Sun:  Jets would be big question mark in short season.  It is a shame that many of the players on this team will not be in game shape since if they were, a shortened season might be just the key for this young team.  But similar to the other teams across the NHL there are just too many question marks.

TSN:  Mark Stuart signs with ECHL’s Florida Everblades.  In case you missed the news, the Jets defenceman signed in ECHL.  Perhaps the Minnesota native had too much of our fine Manitoba weather and needed a little bit of a Florida break.  Or maybe he is preparing himself for possible NHL action in the near future.

CBC:  Bears goalie Braden Holtby stymies IceCaps.  Things continue to go downhill for the Jets AHL affiliate as they continue their losing streak, currently at 4 games and they still have not won in December.  While this was a better effort and they did give up 2 PP goals on 6 chances, St. John’s is going to have to turn things around immediately.  The good news is they will have a chance to do so tonight against these same Hershey Bears.

Reporter Herald:  Colorado Eagles complete rare comeback.  Unlike the Jets AHL affiliate, the Eagles in the ECHL, are rolling as they pulled off their 3 straight win.

TSN:  NHL, NHLPA try to find a way.  Let’s hope today is the day.  Not surprising that the Jets Ron Hainsey is back at the negotiating table.

CBC:  Riding the NHL roller coaster.  And if you thought the ride was over you are dead wrong.  Better strap yourself in as we are about to kick it into high gear with another round of negotiations which renew today.

Ottawa Sun:  Twits have taken over NHL.  An entertaining column that brings some levity to a situation that would be laughable if it wasn’t so depressing.

ESPN:  Moderates push NHL, NHLPA back to table.  In any situation you are always going to have your extreme elements but it sounds as if the silent majority who reside in the middle are finally making themselves be heard and taking control of the process.

The Province:  20 years of Gary Bettman.  Love him or hate him he has certainly done quite a bit for the game during his tenure.

TSN:  TSN, Kraft announce partnership for Kraft Hockey goes on.  A great way to recognize people in the community who do so much work for so little.

CBC:  World junior tryouts draw hockey-starved fans.  3000 fans showed up to watch an inter-squad game.  That pretty much sums up what hockey means to Canadians.

National Post:  Canada’s crease remains wide open at world junior selection camp.  As with most positions on Team Canada competition is high, but this year in net the position is ripe for the taking.