Jets & Affiliate news: Hainsey not near as soft off the ice. Coach Claude Noel joins the Rona Roundtable at noon. IceCaps in need of finishing school. Colorado Eagles finish right.

CBA news: Remember when the players ruled the roost? Latest collapse in negotiations just another part of theatrics. Time for Bettman, Fehr to get busy. Owners are all out of tricks.

World Junior news: Canada has a ‘Plan B’ in case the lockout is resolved.

Winnipeg Free Press:  Hainsey not near as soft off the ice.  He has been a leader in the PA negotiations.  Do you blame him for the stance he has taken?

TSN Radio 1290:  Winnipeg Jets coach Claude Noel joins the Rona Roundtable at noon.  It might not be one of his entertaining pre-game press conferences but if you’ve missed hearing from the Jets coach he will be joining the guys for an hour today. 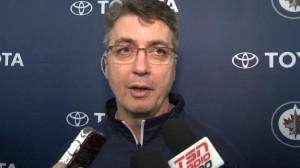 The Telegram:  IceCaps in need of finishing school.  While it is admirable that coach McCambridge is not making excuses, the fact of the matter is the sick bay in St. John’s is practically looking like the starting lineup.  To his credit he is not using this as justification for his team’s poor play.

Reporter Herald:  Colorado Eagles finish right.  One of the keys for this squad is maintaining consistency and not resting on the satisfaction that a pair of weekend road victories may have brought.  Coach Chris Stewart needs to ensure that his guys are ready to go for tomorrow night’s game against Las Vegas back on home ice.

Toronto Star:  Remember when the players ruled the roost?  Perhaps it is time that both sides forgot history of who won which negotiation and just focused on what is best way for teams to make money and for players to continue earning huge large salaries.  And with the ability to carve up a 3 billion dollar pie, there is plenty to go around for everyone.

National Post:  Latest collapse in negotiations just another part of theatrics.  It is at this point in the negotiations (or really 3 months ago) that I’d like to hit the fast forward button and just get to the end of the show.

Edmonton Journal:  Players should be mindful that American NHL jobs are in danger.  Adler argues that owners know exactly what they are doing, even those clubs considered to be in poor markets for hockey.

Montreal Gazette:  Time for Bettman, Fehr to get busy.  No problem seeing what side of the divide Jack Todd puts himself.  One thing he is right about however is the need to stop with the propaganda and for both sides to get down to some real negotiating.

Globe and Mail:  Owners are all out of tricks.  Would like to think that those owners have better things to do with their time than to fly down to New York and take part in a charade.  Are you getting the feeling that the owners, the players, both or neither side are dragging their feet at this late hour?

Montreal Gazette:  CCM looking to the future.  Once again CCM has a chance to spread their message to a significant number of youth players as resources that might have been spent on NHL sponsorship are allocated.

Globe and Mail:  Canada has a ‘Plan B’ in case the lockout is resolved.  It is always a nice feeling knowing that your ‘B’ team can still compete with other countries ‘A’ teams.  You can bet Hockey Canada’s senior director of operations Scott Salmond is checking the news daily to find out the latest lockout news. 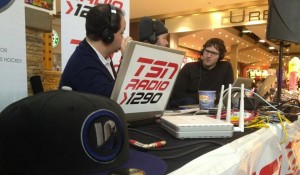 Part 1:  The latest on CBA negotiations.  The proposed lengths of a potential CBA agreement.  The five year limit on contracts.  The compliance issue.  Interview with Jamie MacLennan of TSN and author of “Best Seat in the House”.  Ron Hainsey’s role in CBA negotiations and the effect it may have on his playing career.

Part 2:  Is the NHL as unified as they say they are?  How many games need to be played for it to be a legitimate season?  Interview with Ray Ratto of CSN Bay Area.  Mark Scheifele and the World Junior Hockey Championship.  Rapid Fire.  Interview with Constantine aka @Jetsxoxo.  Cheers & Jeers.