CBA news: Bill Daly says he has ‘no new ideas’ for NHL labour talks. Beyond the smoke and noise, real disputes slowly getting solved. Owners have themselves to blame.

CBC:  Ron Hainsey: The NHLPA’s ‘bad cop‘?  He certainly has become quite polarizing.  How has your opinion changed (or not) of the Jets defenceman during this process?

Winnipeg Free Press:  Uncomfortably numb.  From “cautious optimism” to “downright pessimism” this lockout has seen pretty much everything.

Winnipeg Free Press:  Ready for takeoff.  As much as coach Noel likes meeting with fans to sign autographs, you can bet that he would prefer to be back behind the bench coaching his team. 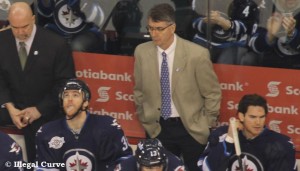 Winnipeg Sun:  Jets lockout penalizes businesses.  As I’ve been saying for awhile, these are the guys who deserve to be ‘made whole’.

Winnipeg Sun:  Hainsey unsure how union gig will sit with Jets fans.  Fans (at least those on twitter) seemed to turn on the Jets defenceman for some perceived slight on Thursday night.  Reality is he has a job to do as Jets players rep, which clearly didn’t win him any popularity contests here in the Peg’, but one his teammates appreciate nonetheless.

TSN:  Hainsey wonders where the NHL talks went wrong.  He was candid with TSN after spending the last week quite tight lipped.

Winnipeg Sun:  Lack of compromise in NHL lockout insulting to Canadians.  Like many, I was absolutely glued to the television on Thursday night as the greatest soap opera on Canadian television played itself out in the most unreal way.

TSN:  Atkinson helps Springfield beat St. John’s.  The IceCaps had some new players in the lineup but it wasn’t enough to ensure victory for the Jets AHL affiliate.

Reporter Herald:  Colorado Eagles break the ice in San Francisco.  Who would think that at this point in the season the Jets ECHL affiliate would be celebrating their first road victory.

CBC:  Bill Daly says he has ‘no new ideas’ for NHL labour talks.  Standard tactic to get the NHLPA back to the bargaining table.  The league does not want to be seen as capitulating once again to the players.

Globe and Mail:  Beyond the smoke and noise, real disputes slowly getting solved.  Same old tune and fans need to stop allowing themselves to be played in this same manner over and over again.

Globe and Mail:  Owners have themselves to blame.  For all the apparent unity within the 29 owners, reality is they are all competing with each other and once this mess ends, that competition for resources will renew.