Winnipeg Free Press:  Chipman brings respect to table.  He is a recent addition to the NHL ownership group but his voice is already seen as a voice of reason.

Winnipeg Sun:  Jets return a real possibility in December.  The talk yesterday was a 56 game season in which you would play the other 14 teams in your conference 4 times.  The excitement level is high but we should caution fans that we have been down this road before so we wouldn’t start counting our games before their scheduled.

Winnipeg Sun:  Jets news and notes.  Burmistrov gets checked by Winnipeg doctors, Yasin Cisse (5th round choice of the Thrashers in 2010) leaves Boston University to join Blainville-Boisbriand Armada, Pavelec finds form and in sad news Dustin Byfuglien’s uncle was killed in an accident.

Wall Street Journal:  Thomson Reuters Tie-Up Pressures Canadian Scion.  An interesting read about one of the owners of the Jets.  The site has a paywall but if you click Media & Marketing, you can read the article.

CBC:  The package – Mark Scheifele.  Over on CBC.com they are periodically checking in with prospects and they took a look at Jets 2011 1st round selection Mark Scheifele. 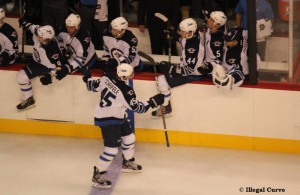 The Telegram:   Burmistrov won’t play this weekend.   Looks like Zach Bogosian will have some company at the MTS Centre as Burmistrov to spends next week in Winnipeg.

The Telegram:  IceCaps get hat trick at award ceremony.  While many think you simply have to put a hockey team into a Canadian market and it will be an instant money maker, the IceCaps have shown that it takes hard work to make this happen.

The Coloradoan:  Collin Bowman a strong presence for Eagles.  They say defenceman take a little longer to mature and it appears that Bowman is could be coming into his own this season.

CBC:  Players in tough spot.   There is a reason the expression at the casino is “the house always wins”.  The owners are in the position of power and at this point the players are scrambling to get as much house money as they can.

USA Today: NHL offer forces players to make big decision.  Both sides are being forced to really do some soul searching to determine if their demands are not worth compromising.  Here is a look at what the owners have offered.

Toronto Star:  Owners almost abandoned talks before cooler heads prevailed.  Another in a long line of bargaining tactics that have been employed by the NHL owners.

Sportsnet:  NHL podium steals spotlight, hilarity ensues.  This is the joy of the internet.  Much like Clint Eastwood’s chair, someone decided to create an NHL podium twitter account, which just yesterday alone, cracked over 10,000 followers.  And to the credit of whomever is running the account the tweets have been hilarious.  Of course this isn’t the first time an inanimate object has gained fame on twitter.  We shouldn’t ever forget @IllegalCurveHat.

Toronto Star:  The nuts and bolts of getting players back on the ice.  A pretty comprehensive Q & A on all things regarding the lockout.

Globe and Mail:  Significant progress reported without Bettman and Fehr in the room.  Kudos to Gary Bettman for removing the Fehr from the room.  It was a masterful chess move and one that appears to be paying dividends as talks progress.

Montreal Gazette:  NHL labour board hearing postponed.  Good news that both sides are staying focused on resolution in New York and not becoming distracted.

Sportsnet:  WHL style of play may be key in Team Canada’s WJHC roster.  Will it be finesse or grit that wins Gold at the World Juniors this year?