NHL news: How close was Doan to become a Flyer? How many players will never return to the NHL?

Note: During November each year, Movember is responsible for the sprouting of moustaches on thousands of men’s faces, in Canada and around the world. With their “Mo’s”, these men raise vital funds and awareness for men’s health, specifically prostate cancer and male mental health initiatives. If you’d like to help the Illegal Curve team as we raise money ($4,574.00 as of this AM) and awareness you are welcome to do so; Dave, Ezra, Drew, #5 Mark Stuart and #44 Zach Bogosian.

Winnipeg Sun:  Hainsey cautiously optimistic about NHL mediation.  The Jets team rep has been on the inside of negotiations pretty much the entire lockout so perhaps it is good news that he is feeling some optimism. 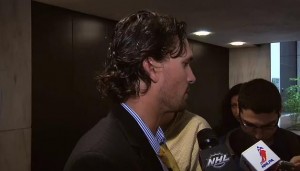 Hockey’s Futures:  Scott Kosmachuk named OHL Player of the Week.  The Jets 2012 3rd round pick finished the week with 8 points and a +6 rating.

Winnipeg Free Press:  Pavs joins Finnish cellar-dweller.  In case you missed the news yesterday, Pavelec is off to Finland for a 6 game stretch with the Pelicans.

The Telegram:  IceCaps off the schneid… whatever that is.  Can Coach McCambridge ensure that the 6-0 victory was more than just an anomaly?

Looks like the NHL lockout is impacting the AHL IceCaps as Derek Whitmore departs the team for Germany.

Winnipeg Free Press:  Mediation raises hope for NHL.  Better late than never.  While non-binding, hopefully they can get the two sides talking and more importantly compromising.

TSN:  Crosby, Ovechkin weigh in on Hamrlik, lockout frustrations.  Crosby is a bit more diplomatic than Ovechkin who doesn’t seem pleased with his teammates comments.

Edmonton Journal:  Smyth remains hopeful as NHL, union agree to mediation. Captain Canada might not have much left in the tank but he hopes that he will still be able to get some games in this season.

Toronto Star:  Labour talks mediator removed over Twitter postings.  Gotta love that whenever something goes bad on Social Media the first declaration is “my account was hacked”.  The guy had some bizarre tweets and probably should have been aware that he would come under scrutiny.

CSN Philadelphia:  How close was Doan to become a Flyer?  Apparently close enough to get a mocked up Philadelphia jersey.  Evan had option of two numbers.

The Hockey News:  How many players will never return to the NHL?  There is some serious money that will be lost by some veterans that they will never get back.  Wonder how the ‘next generation’ will pay them back!