CBA news: Lockout prompts Wild to cut employees’ pay by 20 percent. When is enough enough? Owner and NHLPA mediation attempt will leave both sides in ruins.

Note: During November each year, Movember is responsible for the sprouting of moustaches on thousands of men’s faces, in Canada and around the world. With their “Mo’s”, these men raise vital funds and awareness for men’s health, specifically prostate cancer and male mental health initiatives. If you’d like to help the Illegal Curve team as we raise money ($4,769.00 as of this AM) and awareness you are welcome to do so; Dave, Ezra, Drew, #5 Mark Stuart and #44 Zach Bogosian.

Tonight  is the gala party at The Pyramid Cabaret! They are celebrating this year’s Movember campaign and the great effort all you Mo Bros and Sistas put into raising money and awareness for men’s health!

CSN New England:  Jacobs should be held responsible.  Not sure what is worse, being told to be quiet at a meeting of your peers or being referenced as a NKOTB (new kid on the block).  The story is that at a Board of Governors meeting a Jets representative was reprimanded and “put in the place” befitting someone newly arrived to the party by Bruins Principal Owner and Chairman of the Board of Governors Jeremy Jacobs.

Forbes:  NHL team values.  The claim is the Jets are worth 200 million.  Since the books are not open to public scrutiny there is some guessing involved.  This puts the Jets franchise 20th overall in terms of team value.

YLE Urhilu:  Ondrej Pavelec drops first game 5-4.  Pavs joined the Lahti Pelicans who are the 2nd worst team (13 out of 14) in the Finnish league and gave up 5 goals on 30 shots last night. 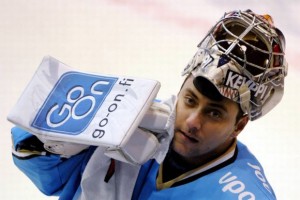 Winnipeg Sun:  Inconsistent IceCaps stuck in a rut.  About the only thing this team has done consistently is win and lose.

The Telegram: IceCaps winger leaves team for Germany.  Look like they have too many cooks in the kitchen over on the East Coast.

Reporter Herald:  Colorado Eagles looking for better results on road.  The team needs to learn how to win those close games on the road.

The Coloradoan:  Colorado’s top line lighting up the ECHL.  That is some significant firepower for the Jets affiliate as they have the 1, 2 and 3 guys in most offensive categories.

Minneapolis Star-Tribune:  Lockout prompts Wild to cut employees’ pay by 20 percent.  Pay cuts are never good but when the alternative is being let go, they are a necessary evil.

Globe and Mail:  When is enough enough? I would have said it was enough 74 days ago but here we are.

Edmonton Journal:  Owner and NHLPA mediation attempt will leave both sides in ruins.  After all that Adler ‘optimism’ who is ready to watch some puck?  Anyone?  Anyone?

Globe and Mail:  Frankly, Glendale, we don’t give a damn anymore.  When will the drama ever end?  I would suggest that there are still some places that care what happens in Phoenix.  (i.e.  Seattle, Quebec City and Markham).

USA Today:  Glendale council approves Phoenix Coyotes deal.  Sports fans the deal has been approved.  Now the ball is in Jamison’s court to finalize the purchase of the Coyotes.

Seattle Post Intelligencer:  Seattle NHL target one step closer to staying put.  The NHL is merely an extra bonus for this NBA town, but one that would help justify the arena expense.