NHL news: Is the Edmonton Oilers’ Jordan Eberle the best sniper in the modern.

Note: During November each year, Movember is responsible for the sprouting of moustaches on thousands of men’s faces, in Canada and around the world. With their “Mo’s”, these men raise vital funds and awareness for men’s health, specifically prostate cancer and male mental health initiatives. If you’d like to help the Illegal Curve team as we raise money ($4,340.00 as of this AM) and awareness you are welcome to do so; Dave, Ezra, Drew, #5 Mark Stuart and #44 Zach Bogosian.

Winnipeg Free Press:  Another chapter added to Pavelec;s European adventure.  The Jets netminder is off to Finland with a debut on Tuesday as he starts a 6 game stint with Lahti Pelicans in Finnish SM-Liiga.

CBC:  IceCaps goalie Pasquale earns shutout against Bruins.  Well the Caps reversed their trend and won the 2nd game of the 2 game series.  Pasquale with a very nice effort earning a shutout along the way.  Both the power play and penalty kill clicked and while Alexander Burmistrov doesn’t get any points for his effort during the kill, it sure helped his team when they needed it. 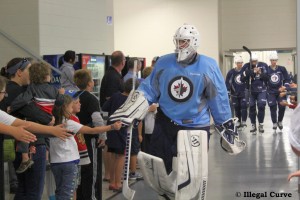 Winnipeg Sun:  Lockout causes tears in beer sales.  What are Manitobans doing with all this money they have saved on beer?

The Hockey News:  Public outburst don’t help perception of players.  Have to agree with Campbell.  I said from outset that players should only tweet non-hockey related thoughts.  They have tried but failed miserably to garner public support via social media.

Ottawa Sun:  Daly hopes NHL labour talks resume this week.  At least they are not waiting until the GM meetings next week which was speculated over the weekend.

USA Today:  Lockout taking toll on Nashville businesses.  The impact the lockout is having on businesses that depend on the game is huge.

Detroit Free Press:  NHL season can still be salvaged.  While there might still be a season, the likelihood is that we will not see Detroit or Chicago heading to Winnipeg this season as the games are likely to be “intra-conference matchups to cut down on travel and allow for more games”.

Montreal Gazette:  Bettman becomes hockey’s worst enemy.  Well we certainly know what side of the divide Jack Todd is on.  If you are a member of the NHLPA you will be better off tweeting a link to this article instead of the usual anti-Bettman rants.

Illegal Curve:  Drew vents his frustration.  Speaking of rants, Drew had quite one on Saturday’s Illegal Curve Hockey show.

Edmonton Journal:  Is the Edmonton Oilers’ Jordan Eberle the best sniper in the modern NHL?  While it appears he is in the upper echelon, he has not quite hit the top spot just yet.

Illegal Procedure: Grey Cup Papers.  Well the 100th Grey Cup is all over with the hometown Argonauts winning in convincing fashion over the Calgary Stampeders and we have all the news from Toronto.