Note: During November each year, Movember is responsible for the sprouting of moustaches on thousands of men’s faces, in Canada and around the world. With their “Mo’s”, these men raise vital funds and awareness for men’s health, specifically prostate cancer and male mental health initiatives. If you’d like to help the Illegal Curve team as we raise money ($4,104.00 as of this AM) and awareness you are welcome to do so; Dave, Ezra, Drew, #5 Mark Stuart and #44 Zach Bogosian.

Globe and Mail:  Mark Scheifele scores hat trick for OHL’s Barrie Colts.  Good to see that he is continuing to tear things up in Jr.  He is now 3rd overall in OHL scoring with 20 goals, 23 assists for 43 points in 25 games.

NHL.com:  Kosmachuk with four points as the Storm beat the 67’s 7-5.  Another Jets prospect who had a hat trick last night.

The Telegram:  P-Bruins beat IceCaps in a shootout.  This is a new type of pattern the Jets AHL team could do without. 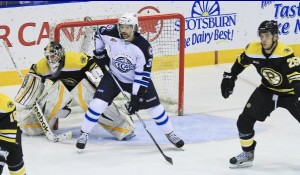 Reporter Herald:  Brown steady in net as Colorado Eagles claim victory.  Despite having never played an Eastern Conference team, the Eagles were able to take 2 out of 3 games in Colorado after last night’s 4-1 victory.

Boston Globe:  Victory is there — now NHL owners need to claim it.  The owners want victory but they need to be magnanimous as they achieve same or they could alienate their players and more importantly their fans even further.

USA Today:  Locked-out players put on a show for fans, charity.  At least they can use their time to help a good cause.

Illegal Procedure: CFL Playoff Papers. The 100th Grey Cup will feature the Calgary Stampeders heading east to play the hometown Toronto Argonauts. We have all the latest news from both the Calgary and Toronto perspective.