Note: During November each year, Movember is responsible for the sprouting of moustaches on thousands of men’s faces, in Canada and around the world. With their “Mo’s”, these men raise vital funds and awareness for men’s health, specifically prostate cancer and male mental health initiatives. If you’d like to help the Illegal Curve team as we raise money and awareness you are welcome to do so; Dave, Ezra, Drew, #5 Mark Stuart and #44 Zach Bogosian.

Note II:  We are introducing the newest IC Contest;  Guess the day the lockout is officially announced as over by the NHL.  Send us an @ tweet to @illegalcurve with the date you think the NHL will publicly state the lockout has ended and you can win IC Gear as well as some gifts from our sponsors.

The Hockey Writers: Zachery Yuen interview – Getting ready for Yuen-sanity.  Probably a bit soon for Jets fans to be planning to get excited over Yuen-sanity but he is a nice defensive prospect for the Jets system. 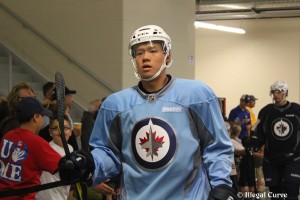 TSN:  Pasquale stops 45 shots to help IceCaps defeat Bulldogs.  Perhaps Pasquale can help turn things around for the IceCaps who have been in a malaise to start the season.

The Coloradoan:  Defending ECHL champs face off against Eagles.  Interesting that the Eagles have never before faced a team from the Eastern Conference.  But that changes when the ECHL champion Florida Everblades come to town.

Philly.com:  Early optimism in talks.  Hot off the presses it appears that the players are prepared to make some major concessions this morning.

Columbus Dispatch:  Dreaming of the draft.  Looks like 6 teams, including Winnipeg, would have a pretty, pretty, pretty good chance of landing the number 1 pick overall.

Globe and Mail:  NHL’s corporate wall showing signs of cracking.  This time around the NHL has more major NHL sponsors that they need to appease.

Globe and Mail:  The NHL should learn from its ‘socialist’ cousin, the NFL.  Would you prefer to see a more balanced NHL?  It is difficult to compare yourself to the most successful league in North America, but perhaps they have been able to achieve this via the “League Think” approach.

Pittsburgh Tribune-Review:  Lockout costs Pittsburgh area economy $2.1M for each home game lost.  You can expect that this situation is going on in all NHL cities.

Sportsnet:  Making sense of nonsense (video).  John Shannon, Nick Kypreos and Scott Morrison discuss what to expect from the upcoming negotiations between the NHL and NHLPA.

USA Today:  Time for NHL, players to negotiate or face disaster.  Really appears that the players end game is in sight.

Delaware County-Times:  Flyers’ Giroux to visit concussion specialist.  The big concern when your player goes off to Europe to play hockey is they return to North America sporting an injury.

Illegal Procedure: CFL Playoff Papers. While the Bombers season might be done there is still plenty of CFL news as the Grey Cup Finals have been set. The 100th Grey Cup will feature the Calgary Stampeders heading east to play the hometown Toronto Argonauts.