Jets news: Zachery Yuen interview – Getting ready for Yuen-sanity. Scheifele learning the hard lessons about how to move up to bigs. NHL Players to Join Firefighters, Police in Charity Hockey Game. IceCaps dealing with power-play outage. Colorado Eagles look on the bright side.

Note: During November each year, Movember is responsible for the sprouting of moustaches on thousands of men’s faces, in Canada and around the world. With their “Mo’s”, these men raise vital funds and awareness for men’s health, specifically prostate cancer and male mental health initiatives. If you’d like to help the Illegal Curve team as we raise money ( just over $3,500.00) and awareness you are welcome to do so; Dave, Ezra, Drew, #5 Mark Stuart and #44 Zach Bogosian.

The Hockey Writers:  Zachery Yuen interview – Getting ready for Yuen-sanity.  Probably a bit soon for Jets fans to be planning to get excited over Yuen-sanity but he is a nice defensive prospect for the Jets system.

Winnipeg Free Press:  Scheifele learning the hard lessons about how to move up to bigs.  Learning from one of the best has continued to help the Jets 1st pick overall from 2011. 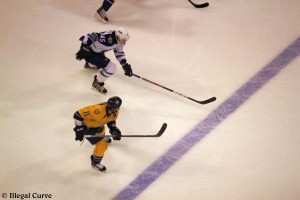 ChrisD.ca:  NHL Players to Join Firefighters, Police in Charity Hockey Game.  While some players around the league have made questionable PR moves (i.e. hats that say Puck Gary or calling the commissioner an “idiot” and the latest one a “cancer”) the Jets players have been pretty quiet on that front.  Instead they have wisely been participating in charity games or impromptu pick up games which have helped to cement their place in this city.

The Telegram:  IceCaps dealing with power-play outage.  Scoring just 2 power play goals in 56 opportunities is not going to help your team win many hockey games.

Reporter Herald:  Colorado Eagles look on the bright side.  After a 5 game win streak, the Eagles came up short on their Alaskan adventure but the team took some positives from the trip.

Toronto Star:  NHLPA, league finding common ground.  Taking a look at where the two sides have come to tentative terms and which issues remain sticking points.

ESPN:  NHL, NHLPA have abused our trust.  John Buccigross lays it all out as this article as his disdain for both sides is quite evident.

Winnipeg Free Press:  Negotiations? Yawwwwn… just let us know when it’s over.  The apathy that fans are feeling is palpable.  Whenever we talk to people these days the sentiment is just as Ed conveys in this article, they just want to know when it’s over and they can head back to the rink.  The constant PR games by both sides are pretty useless as fans seem immune to the moves.

Comcast Philadelphia:  Versteeg wants ‘cancers’ Bettman, Fehr gone.  It is this type of vitriol which is completely unnecessary.  Perhaps Kris Versteeg needs to head to his local hospital to see what real cancer looks like and perhaps then he won’t be so casual when referencing such a serious disease.

Globe and Mail:  Will the real players in this lockout drama please step up.  At this point would the intervention of the best players on both sides have a real impact?

Toronto Star:  Maple Leafs GM Brian Burke new face at talks.  This process needs new ideas and perhaps with the addition of new voices at the table we can start to see some progress with talks.

Globe and Mail:  When it comes to NHL lockouts, nothing changes but the names.  That’s why Bettman has to be somewhat immune to the name calling.  He experienced it back in 94′ and again in 05′ although with social media this time around it has become much more wide-spread.

Columbus Dispatch:  All-Star Game nears cancellation.  Looks like the game is scheduled to go along with the next segment of cancellations by the league which as far as I’m concerned is appropriate given that neither side deserves reference as all-star this season.

Illegal Procedure: CFL Playoff Papers. While the Bombers season might be done there is still plenty of CFL news as the Grey Cup Finals have been set. The 100th Grey Cup will feature the Calgary Stampeders heading east to play the hometown Toronto Argonauts.