Note: During November each year, Movember is responsible for the sprouting of moustaches on thousands of men’s faces, in Canada and around the world. With their “Mo’s”, these men raise vital funds and awareness for men’s health, specifically prostate cancer and male mental health initiatives. If you’d like to help the Illegal Curve team as we raise money and awareness you are welcome to do so; Dave, Ezra & Drew, #5 Mark Stuart and #44 Zach Bogosian.

Note II:  Stay tuned to a special edition of the Illegal Curve Hockey Show on TSN Radio 1290 today from noon to 3 pm live from the Max Bell Centre at the University of Manitoba.  The guys will be interviewing players throughout the show before the players take part in the Goals for Dreams – Team Ladd vs. Team Stuart at 3:30 pm.

Winnipeg Free Press:  Euro-Flops.  A little humble pie is in order after the failed European adventure taken by some members of the Jets.

Winnipeg Free Press:  Trouba tweaking his speaking.  Part of the maturing process is recognizing your limitations and attempting to improve on them.  Good for the Jets draft pick. 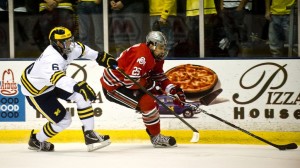 Winnipeg Sun:  Jets think proposed two-week break ‘ridiculous’.  Taking time off at this point is a calculated move by the NHL.

The Telegram:  IceCaps start homestand with win.  Burmistrov scores the game winner in the shooutout.  Hopefully this is going to get the Caps back on track.

Edmonton Journal:  The NHLPA’s attack on Bettman’s “two-week delay” is laughable.  Love how Adler doesn’t pull any punches in his piece.

CSN Philadelphia:  Is Flyers’ Snider helping thaw NHL talks?  Both sides realize that they gain nothing by dragging this out.  The deal they will end up with is not really one that is desired by either side (likely an indication that if both feel they are ‘losing’ then it is likely a fair deal).  Let’s hope Snider can get this back on track.

TSN:  Red Wings D White calls Bettman ‘an idiot’.   When White gets his pay cheque he might want to evaluate his statement as Bettman has helped increase player salaries to unprecedented levels.

Arizona Republic:  Council to review plan for Coyotes.  The saga continues as Glendale council sees the payments to Jamison as too generous.  At what point does Ice Edge get mentioned?

Seattle Post Intelligencer:  First design concepts for Seattle’s Sodo arena project.  Pretty cool and with the NHL arena problems in Southern Ontario, perhaps Seattle might be in line if a certain team in the above story doesn’t get things figured out soon.

Illegal Procedure: CFL Playoff Papers. While the Bombers season might be done there is still plenty of CFL news as the Finals in both the East and West have been set.   Conference Finals are here.  Which game is more intriguing to watch?