Note: During November each year, Movember is responsible for the sprouting of moustaches on thousands of men’s faces, in Canada and around the world. With their “Mo’s”, these men raise vital funds and awareness for men’s health, specifically prostate cancer and male mental health initiatives. If you’d like to help the Illegal Curve team as we raise money and awareness you are welcome to do so; Dave, Ezra, Drew, #5 Mark Stuart and #44 Zach Bogosian.

Winnipeg Free Press:  Blackhawk back home.  Toews joined us to talk about how much he enjoyed being back in the city and being able to contribute to the charities.  However you could also sense his mounting frustration as the lockout continues to grind on. 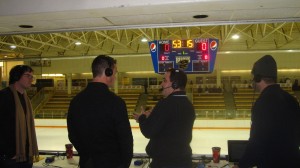 You can hear his interview from yesterday’s Illegal Curve Hockey Show here;

Winnipeg Free Press: Players miss camaraderie.  As much as this game is work, the guys still have a ton of fun doing their job, and when you see the practical jokes going on in the dressing room, you can understand why they miss that aspect of the games.

Winnipeg Sun:  Local lads missing their Winnipeg Jets.  Even the young fans are sounding as jaded as everyone else.

Winnipeg Sun:  Devils punish IceCaps.  Much like they have done all season St. John’s split the series with Albany.  These Caps need to get back to their sweeping ways if they want to content in the AHL.

Coloradoan:  NHLers power Alaska to victory over Colorado.  It is somewhat difficult when you’ve added AHLers and your opponent has similarly added NHLers to their roster to compete at that gun show.

Illegal Curve:  Goals for Dreams highlights.  Some pictures and videos from yesterday’s charity game which brought together the NHLPA players and local law enforcement.

Star-Ledger:  NHL, NHLPA schedule meeting for Monday.  So much for that two week break that the NHL proposed.  Perhaps they heard the grumblings of the fans and understand that their power play move may work against the players but fans were not going to approve of same.

Columbus Dispatch:  All-Star Game might not be worth saving.  Somewhat hard to justify anyone deserving of all-star status during this season.

New York Post:  Union won’t decertify.   Hardly a surprise.  Another play by the NHLPA to show the unity of players.

USA Today:  Claude Giroux’s injury is ‘very minor’.  Whenever a marquee player is hurt, regardless of how minor the injury, the team and its fans cannot be happy that an important piece of their puzzle is now damaged.

Columbus Dispatch:  Blue Jackets’ prospect Murray hurts shoulder.  It is still too early to tell what sort of damage was done to the shoulder and Jackets fans are hoping it is minimal.

Illegal Procedure: CFL Playoff Papers. While the Bombers season might be done there is still plenty of CFL news as the Finals in both the East and West have been set.   Conference Finals are here.  Which game is more intriguing to watch?