CBA news: Why do billionaires keep buying teams that lose money. Bill Daly – “Maybe they should get a reality check”. Bettman suggests to NHLPA that sides take a break in negotiations. Season not in danger of being wiped out – yet.

NHL news: Oilers’ Fab 5 can’t wait to do it in the NHL. Jackets brass getting early jump on Amateur meetings.

Note: During November each year, Movember is responsible for the sprouting of moustaches on thousands of men’s faces, in Canada and around the world. With their “Mo’s”, these men raise vital funds and awareness for men’s health, specifically prostate cancer and male mental health initiatives. If you’d like to help the Illegal Curve team as we raise money and awareness you are welcome to do so; Dave, Ezra & Drew, #5 Mark Stuart and #44 Zach Bogosian.

Winnipeg Free Press:  KHL’s Dynamo Minsk releases Jets’ Kane.  Appears Kane will be pulling a reverse Rochelle Rochelle, as he heads back from Minsk.  Kane played in 12 games for Dynamo Minsk, registering 1 goal, 0 assists, and a plus/minus of minus 8 with 47 penalty minutes.

Winnipeg Free Press:  Vicious as a WOLVERINE.  He certainly doesn’t hold back.  The Jets appear to have quite the find in Trouba and his development under coach Red Berenson at the U of Michigan bears watching.

NHL.com:  Khokhlachev outstanding as Russia wins Super Series.  For the 2nd time in 10 years the Russians were able to pull off the series victory.  Jets prospect Adam Lowry, who was captaining the WHL team, scored a goal although he finished the night -2. 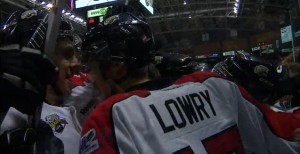 Montreal Gazette:  Four points for Gionta in Habs fantasy win.  With the lack of conversation between either side, turning towards analysis of a fantasy game is really looking like the closest we will get to NHL hockey in near future.  Last night was supposed to be the Habs first visit to the MTS Centre of the 2012-13 season.  If you’re keeping track of the Jets season schedule, they were next supposed to be on the road in Boston on the 17th.

Illegal Curve:  Goals for Dreams Charity game– Team Ladd vs. Team Stuart.  Stay tuned on Saturday to the Illegal Curve Hockey Show on TSN Radio 1290 as we will be live from Max Bell from noon to 3 pm.

Sportsnet:  AHL’s IceCaps look to regain winning touch.  This team was 11-2-3 at this time last year.  Of course Jets fans were enjoying NHL hockey at the MTS Centre so quite a lot can change in a year.  Hopefully this 6 game home stand will help the Caps turn things around.

Edmonton Journal:  Why do billionaires keep buying teams that lose money.  Creative accounting can do some wonderful things, especially when it gives you the ability to write a lot of things off.  Which reminds me of an exchange between Kramer and Jerry Seinfeld;

Kramer: all these big companies they write off everything.
Jerry: You don’t even know what a write-off is.
Kramer: Do you?
Jerry: No, I don’t.
Kramer: But they do – and they are the ones writing it off.

While we might not be privy to the inside books of NHL teams, owners are not buying teams out of the goodness of their hearts.  They have gotten where they are because of business acumen and throwing money away is generally not in their DNA.

Minneapolis Star-Tribune:  Bill Daly – “Maybe they should get a reality check”.  Missed pay cheques and harsh language signal this is gonna be a bumpy ride for fans.

Globe and Mail:  Bettman suggests to NHLPA that sides take a break in negotiations.  So on one hand the deal can be done quickly but on the other, the thought is to delay this a couple of weeks.  The posturing continues as both sides battle for leverage.

Globe and Mail:  Season not in danger of being wiped out – yet.  It remains a ‘who will blink first’ situation between both sides.

Edmonton Sun:  Oilers’ Fab 5 can’t wait to do it in the NHL.  They might not be lifting the Stanley Cup next year (if there is a season that is) but it isn’t hard to see once they add a few more pieces to the puzzle, the label City of Champions becoming appropriate once again.

Columbus Dispatch:  Jackets brass getting early jump on Amateur meetings.  You can see the imprint of JD already as he attempts to get the Jackets organization up to his standard.

Illegal Procedure: CFL Playoff Papers. While the Bombers season might be done there is still plenty of CFL news as the Finals in both the East and West have been set.  Kevin Glenn will be leading the Stamps in the Western Final.   Over in the East it looks like Owens could come back to haunt Als.