Note: During November each year, Movember is responsible for the sprouting of moustaches on thousands of men’s faces, in Canada and around the world. With their “Mo’s”, these men raise vital funds and awareness for men’s health, specifically prostate cancer and male mental health initiatives. If you’d like to help the Illegal Curve team as we raise money and awareness you are welcome to do so; Dave, Ezra, Drew, Daniel, Hamilton Steen and #5 Mark Stuart.

Last night the Movember Winnipeg crew held an event called Mo Food Mo Beer Mo Wine at Confusion Corner Bar & Grill which was hosted by Winnipeg’s own comedian Big Daddy Tazz. Ez and I had the opportunity to attend and it was a lot of fun. They raised a lot of money for charity with the help of some of the Jets players who were in attendance. Mark Stuart and Zach Bogosian ended up bidding against each other in the live auction for the curling jersey of 2008 World Curling Champion Jill Officer, which Zach Bogosian ended up winning. Mark Stuart’s Movember team has been amalgamated into Team Illegal Curve, so stay tuned as we kick our fund raising up a notch. 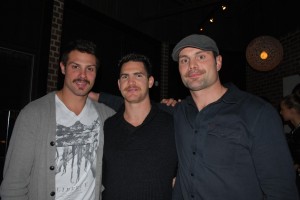 Winnipeg Free Press: A good ol’ hockey game. No NHL hockey. No problem. Stanley Cup champ Mike Richards and Jets captain Andrew Ladd decided to have an impromptu street hockey game at the top of the Forks parking complex. Along with Jets Mark Stuart and Jim Slater plus a few hundred Winnipeggers played some hockey.

Winnipeg Free Press: Next CBA crucial to Jets success. Cost certainty can go a long way to helping the long term future of the Jets franchise.

KTAR:  Glendale copes with consequences of NHL lockout.  For all the talk about how teams like Phoenix are saving money by not playing and losing money, the businesses around Westgate are losing out quite significantly.

Vancouver Sun:  NHL cold war may be thawing.  Larionov seems quite optimistic and let’s hope for the sake of hockey he is accurate.

Globe and Mail: Hockey memorabilia seller suffers sales shutout from NHL lockout. As has been documented elsewhere, sales are down everywhere, including apparently in the memorabilia market.

Arizona Republic: Lockout reality checks the Phoenix Coyotes’ Paul Bissonnette. Planning for the future probably started for many players last year as the reality of a lockout had to be present and you hope their agents advised them to put away funds for a rainy or snowy day.

Globe and Mail: An undercurrent of anger at the Hockey Hall of Fame. The thinking remains that the NHL is close to losing die hard hockey fans. I’m still not convinced this will be the reality as I think overall while fans might be furious, at their core, their love of the game will bring them back, regardless of the league politics.

The Province: Retire Bure’s No. 10, says Larionov. The parting between the Canucks and Bure was not so sweet, but perhaps the passage of time will cool heads and have both realizing what they meant to each other.

Illegal Procedure: CFL Playoff Papers. While the Bombers season might be done there is still plenty of CFL news as the Finals in both the East and West have been set.