CBA news: NHL and NHLPA brake off talks; Bettman says its a step back. Fork in the road. Could Waterloo Region fix the NHL lockout? A breakdown the NHL’s latest proposal. Don Cherry sympathizes with both sides. Will fans forgive and forget? Time to put grudges aside in NHL lockout. Gary Bettman doing a good job of staying out of the way. Why the players won’t go for NHL’s latest proposal.

NHL news: NHL draft crop is one of the deepest in a decade. City to Katz – Maybe we’ll build it ourselves.

TSN:  Ladd, Hnidy weigh in on NHL’s latest offer.  Dennis has lots of information for Jets fans in his latest blog post.

The Telegram:  Captain’s shore leave extended.  Looks like Caps captain Jason Jaffray will be on the mend a bit longer than expected.

Winnipeg Sun:  NHL’s 50-50 offer a snake.  Paul spoke with some Jets as well as local NHLers about the league’s offer and they seem unimpressed by it. 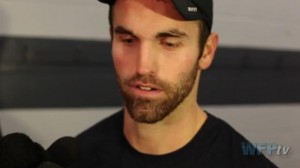 TSN:  NHL and NHLPA brake off talks; Bettman says its a step back.  Based on the talk from the players this is disappointing but hardly surprising.

Winnipeg Free Press:  Fork in the road.  The elation many felt yesterday is being replaced with cold reality today.

Waterloo Record:  Could Waterloo Region fix the NHL lockout?  It certainly couldn’t hurt for the league to leave unprofitable markets for ones that will be revenue generators.

Globe and Mail:  The dividing lines of the offer – A breakdown the NHL‘s latest proposal.  Taking a look at the most contentious issues between the two sides.

Montreal Gazette:  Don Cherry sympathizes with both sides.  Cherry’s candor is refreshing in the face of  the usual platitudes that both sides try to feed the fans.

Montreal Gazette:  Will fans forgive and forget?  Yes and Yes.  Only way either answer changes is if this lockout costs fans the entire season.

CBC:  Time to put grudges aside in NHL lockout. Elliotte Friedman discusses the proposal that players have been sitting on for some time.  Looks like we will be seeing it pretty soon.  The NHL and NHLPA will be meeting in Toronto today so stay tuned to @illegalcurve for all the latest CBA news.

National Post:  Gary Bettman doing a good job of staying out of the way.   There is a reason he has maintained his position for close to two decades.  He made a power play on Wednesday and appears to have captured the hearts of fans everywhere who were saying “what’s wrong with 50/50?”.

Globe and Mail:  Why the players won’t go for NHL’s latest proposal.  Because they are “tired” of giving, giving, giving.  For the players sake, they better hope that they counter with a reasonable compromise, or you will see any support they have, quickly die off.

NHL.com: Proposal to save 82 game season. If you missed it yesterday, the NHL released details of their offer.

USA Today:  NHL draft crop is one of the deepest in a decade.  Good thing that the Jets brass were picking up all those extra picks for the next draft.

Edmonton Journal:  City to Katz – Maybe we’ll build it ourselves.  The city council is unanimous and won’t back down in their fight with Oilers owner Daryl Katz.

Dallas Stars Ice Girls: While I normally hate country music….perhaps it isn’t so bad.  Similar idea to what the Dallas Cowboys Cheer team did to ‘Call Me Maybe‘ a few months back.  The State of Texas sure knows how to have fun.

Illegal Procedure: Winnipeg Blue Bombers Papers. If you are a fan of CFL football, check out our other site, which gives you all the latest Bombers news. We learned yesterday that the post season dream is not quite over. Looks like the Blue will be going with Buck Pierce at QB.  Good move?